Extensibility is a key capability of SAP ECC and SAP S/4HANA. It enables customers to create a competitive advantage by customizing their business processes and allows partners to enrich core ECC or S/4HANA with tailor-made solutions.

During the last decades SAP’s on-premise customers and partners have mainly used classic ABAP extensibility to extend their ERP solution. Classic extensibility allows ABAP developers to use and even to modify all SAP objects. Although, classic extensibility is very powerful and flexible, it is no longer a good option in today’s cloud world.

SAP S/4HANA provides a new upgrade-stable cloud extensibility model that clearly separates SAP code and extensions via public SAP APIs and SAP extension points. In this blog we will understand:

SAP partners and customers who are either building a new extension on SAP S/4HANA or migrating existing extensions from traditional SAP ECC to SAP S/4HANA.

We all know that standard SAP software doesn’t cover the scope of all the company business processes. There is always a need for a new app, a new report, or a new functionality. SAP partners and customers have been traditionally building extensions on SAP ECC system using ABAP code. However, with SAP S/4HANA and customer’s digital transformation journey towards cloud, we need a more robust yet loosely coupled extensibility model. 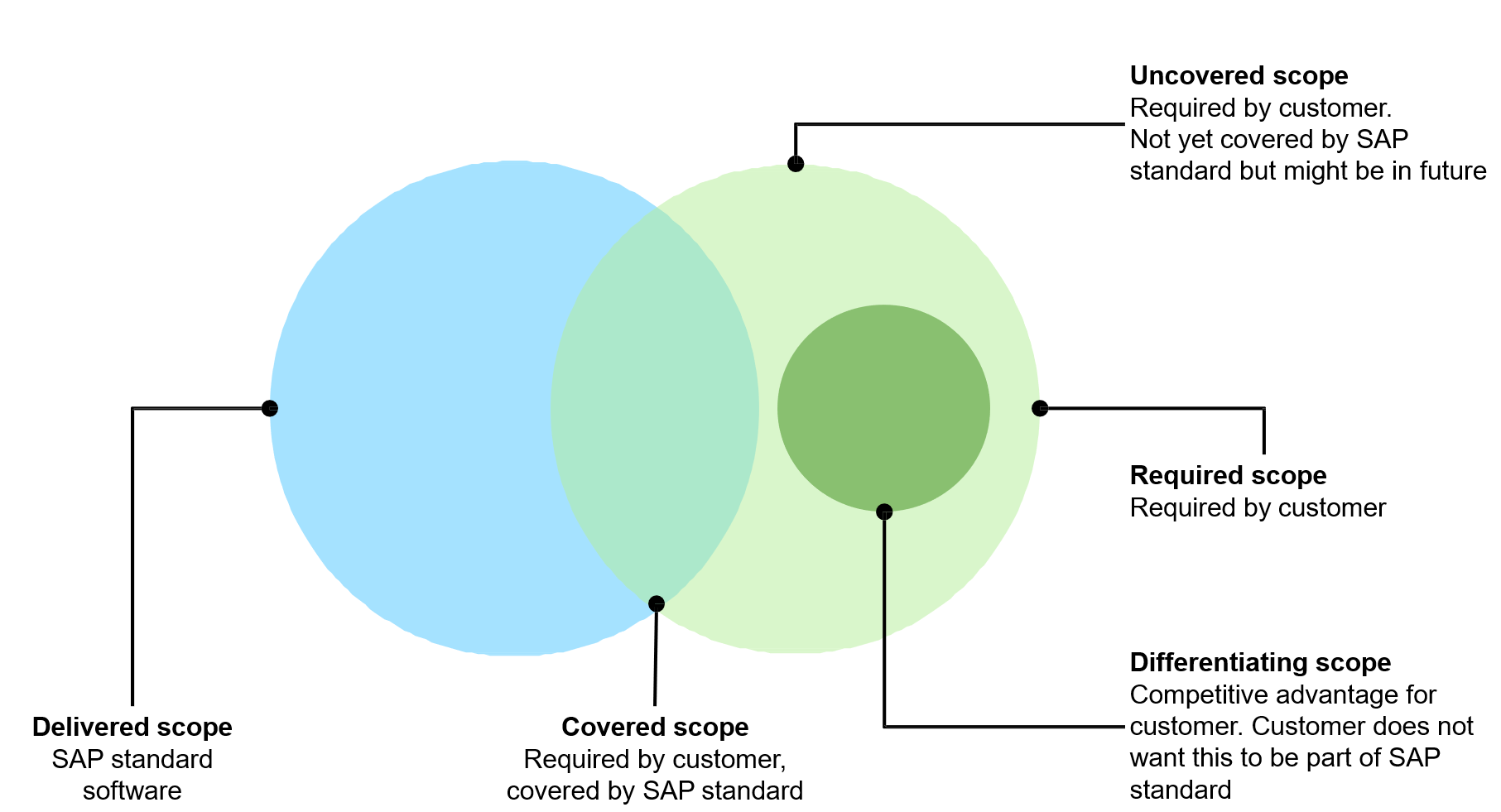 Traditionally, SAP partners and customers have been using classic ABAP extensibility to extend their ERP solution. 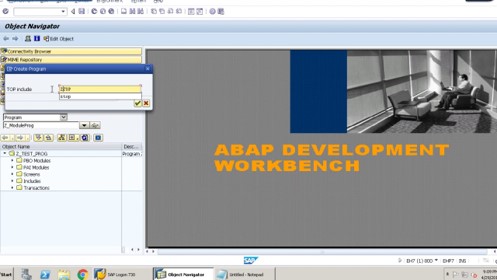 Although, being very powerful, flexible, and popular, classic extensibility has some major drawbacks.

One of them is High Upgrade Efforts!

The missing clear interface between SAP code and extensions might lead to issues in the extensions during upgrades. As a result, upgrades require high planning, regression test, and adaption efforts, which is one of the reasons why customers delay upgrades.

You have used an SAP object that is not whitelisted by SAP in your extension. After an upgrade the used SAP Object has been changed or deleted. Now you will have to adjust the extension thus upgrade is delayed.

Classic Extension is no longer a good option specially in Cloud World.

In S/4HANA Cloud automated software updates run for all customers in parallel. Hence classic extensibility is not available there.

In S/4HANA Private Cloud Edition and On-Premise –Classical extensibility is available but not recommended.

Clean core is an extension methodology in which

By following clean core paradigm, you make sure that

Before we proceed further, let’s quickly revisit some important terminologies that we need to know before understanding the S/4HANA extensibility model.

Steampunk was actually the internal project name but got quite popular externally.

The ABAP development environment of SAP S/4HANA is now available for developers to build extensions and known as Embedded Steampunk.

SAP S/4HANA Cloud public edition allows customers and partners to use S/4HANA without the need to take responsibility for the cloud infrastructure and operations.

SAP manages all operation and lifecycle management tasks such as continuous feature delivery or providing hotfixes and regular upgrades to new software versions.

SAP S/4HANA Cloud is a SaaS product from SAP.

The major difference between S/4HANA Cloud, Private Edition and S/4HANA Cloud is the ownership of operating the solution.

SAP S/4HANA Cloud, Private Edition is NOT a SaaS product from SAP.

Now that we have got the important jargons covered. Let’s come to the main topic – What are different extensibility options in SAP S/4HANA?

This cloud extensibility model consists of: 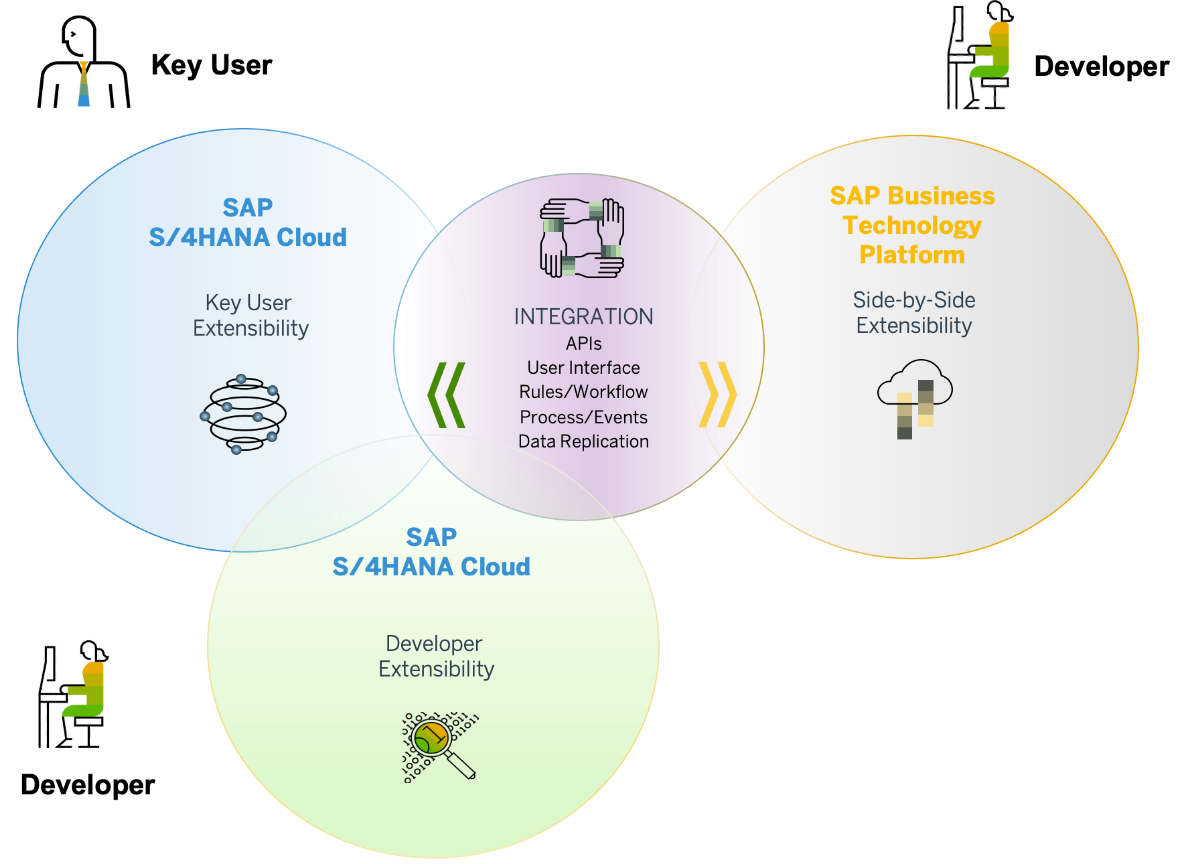 All these extensibility options use only SAP APIs and SAP extension points that have been released and are stable.

Key users typically have deep knowledge of SAP business and process but no or only limited coding skills.

Key users typically have no or only limited coding skills and therefore do not need a fully integrated development environment, with capabilities such as versioning, dependency handling, refactoring, or debugging.

Watch this demo video to see how powerful key user extensibility is.

With the provided key user tools the key user can achieve the following use-cases: 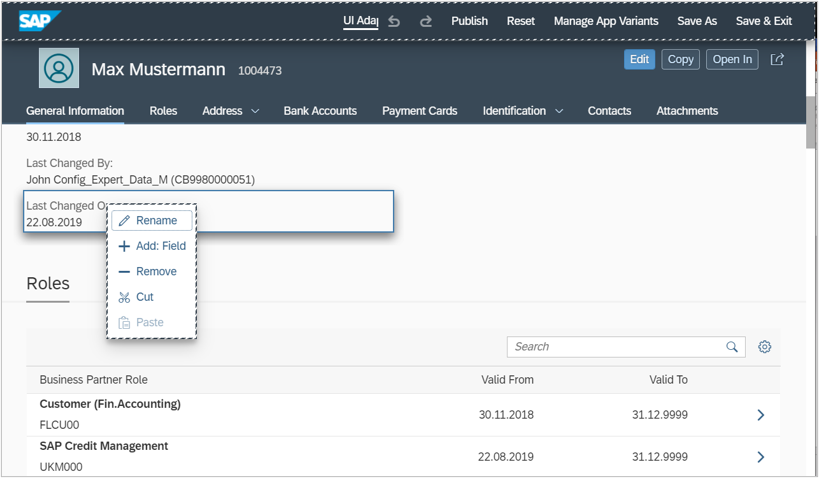 Add custom fields to business objects. The custom field is then available in the entire application stack (from the UI to the database tables or for developer extensibility). 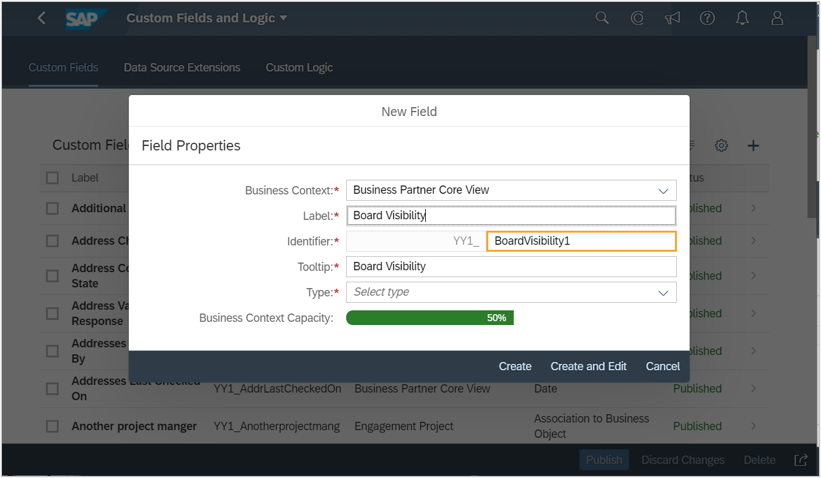 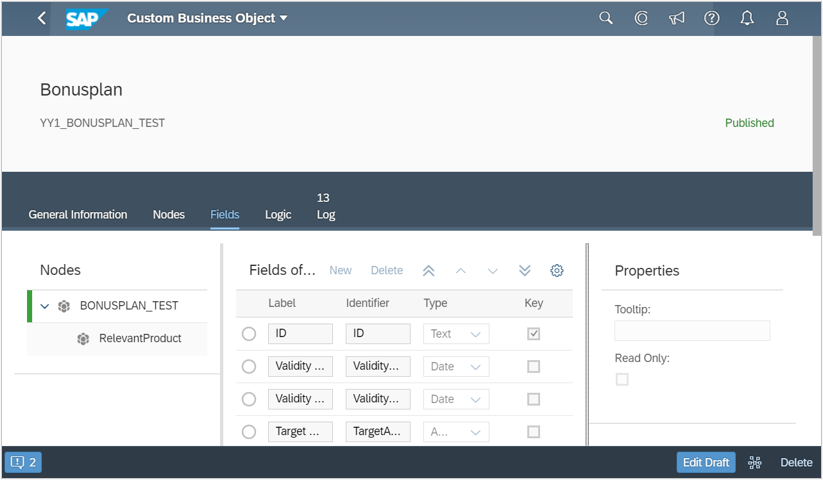 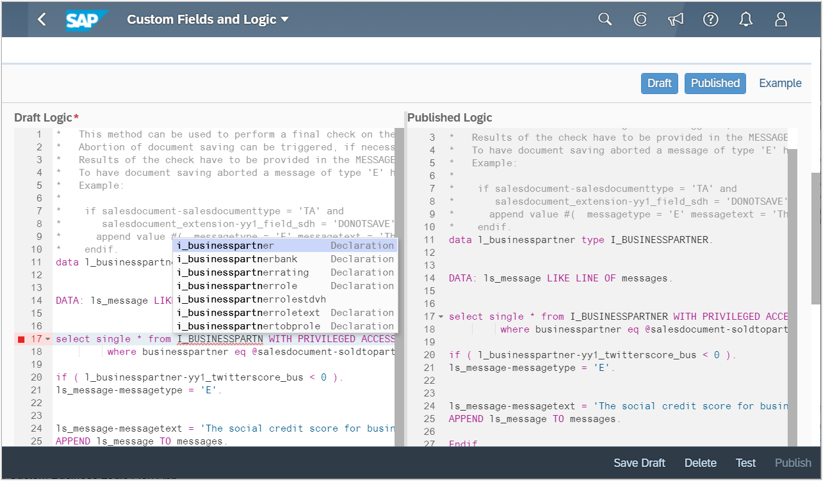 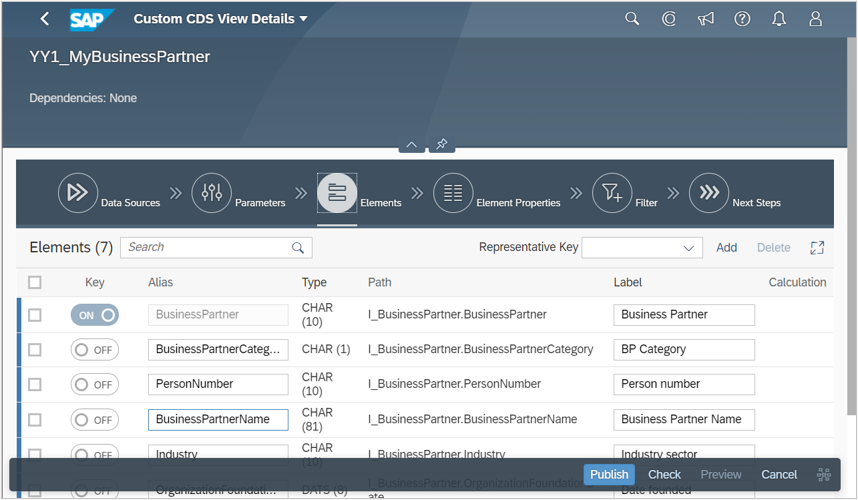 Some business requirements lead to extensions that are

That’s where developer extensibility come in. Developer Extensibility is intended for those extensions, 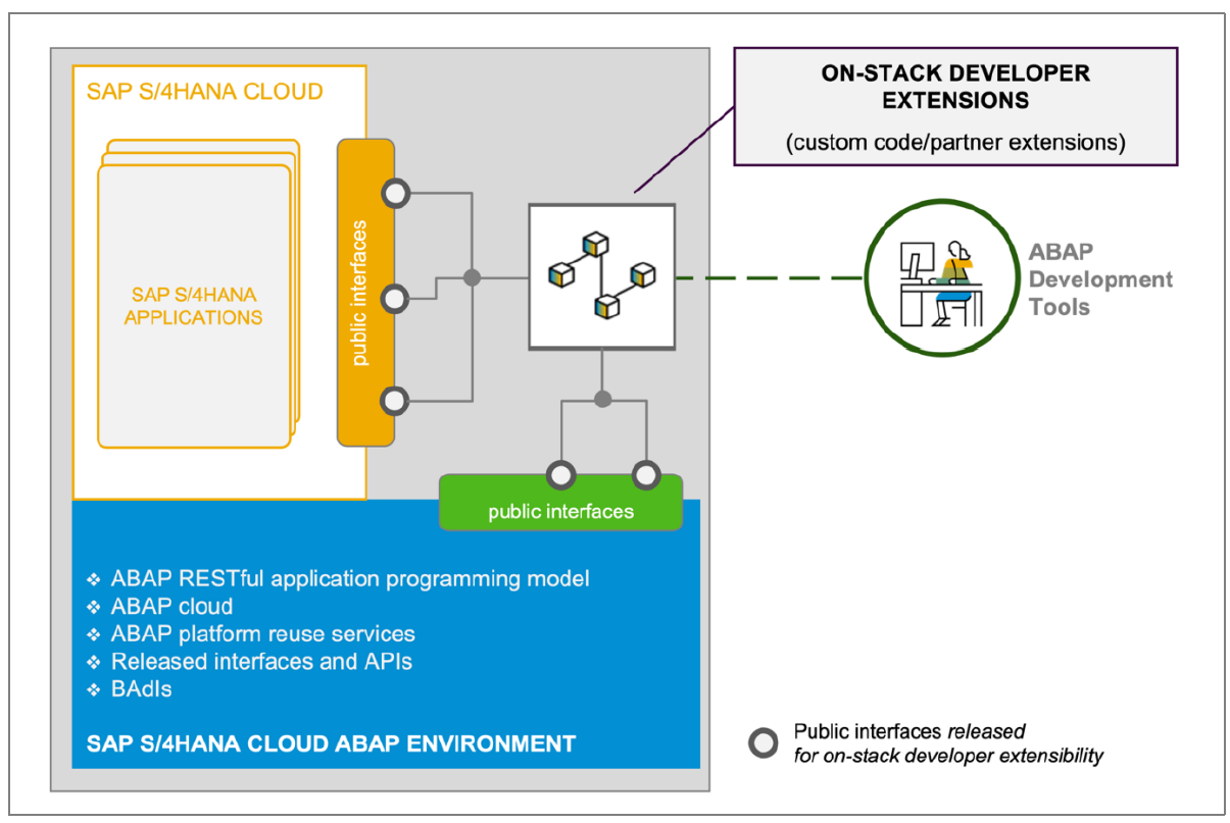 On-stack extensions are developed and run on the same software stack as the underlying SAP S/4HANA Cloud system. This allows extensions to access SAP S/4HANA logic and data via SAP extension points, local SAP APIs or via SQL queries.

However, the extensions are developed using the new ABAP RESTful Application Programming model (RAP), which ensures that no SAP object is modified and that only local public SAP APIs and public SAP extension points are used in the extensions.

A customer simplifies the process for recurring employee purchases below a certain amount.

SAP BTP offers a wide range of capabilities and services tailored to the needs of enterprise applications. 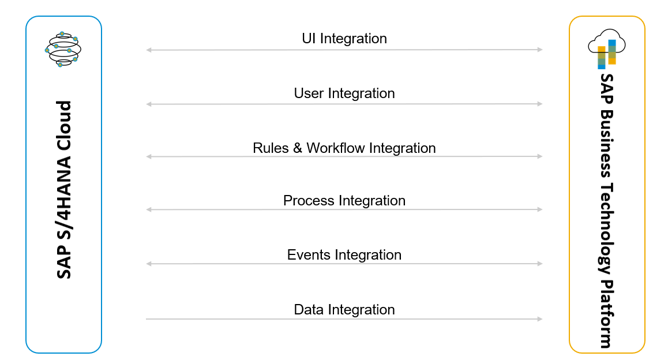 Major difference compared to the on-stack extensibility model is that:

Accessing SAP S/4HANA Cloud data is only possible using remote APIs which are published in the SAP API Hub (https://api.sap.com/).

SAP BTP has been designed to make it much easier to build and integrate side-by-side extensions for SAP products compared to other generic platforms.

A typical side-by-side use case is the hub scenario. A hub solution integrates with several ERP systems and cloud services. partners want to provide a SaaS solution

Based on a set of business rules, the application identifies the allowed approvers for specific purchasing documents and provides the information as a central remote OData API to the distributed purchasing processes.

A partners want to provide a SaaS solution to many customers.

A partner has figured out a use-case which is a strategic gap in SAP S/4HANA. He wants to provide the solution as a SaaS solution and cater to multiple customers.

SAP BTP is specially optimized for large SAP or partner SaaS solutions which benefit from the multitenancy offerings and services for partners to run and operate the solution.

CAP is not a specific product but a framework, a set of tools, languages, and libraries that: 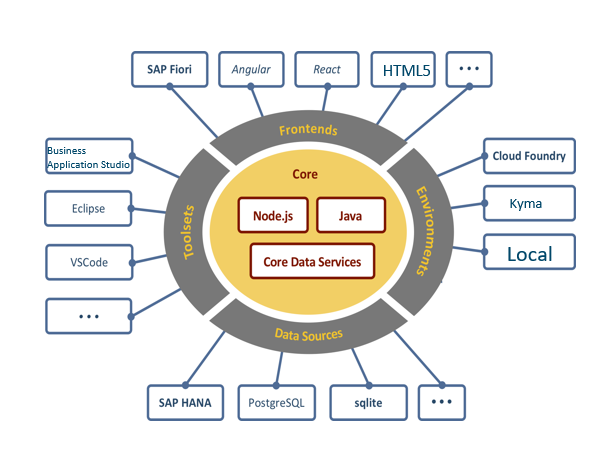 To know more about CAP, refer to https://cap.cloud.sap/

RAP is a set of concepts, tools, languages, frameworks, and best practices provided on the ABAP Platform.

Here comes the most important part –

To decide right extensibility option for your use-case, you should consider following aspects.

Is the extension a new application, or an extension to an SAP app?

Is the extension loosely or tightly coupled to SAP S/4HANA?

Who provides the extension for which purpose?

The following Figure provides a decision tree to select the right extensibility option. 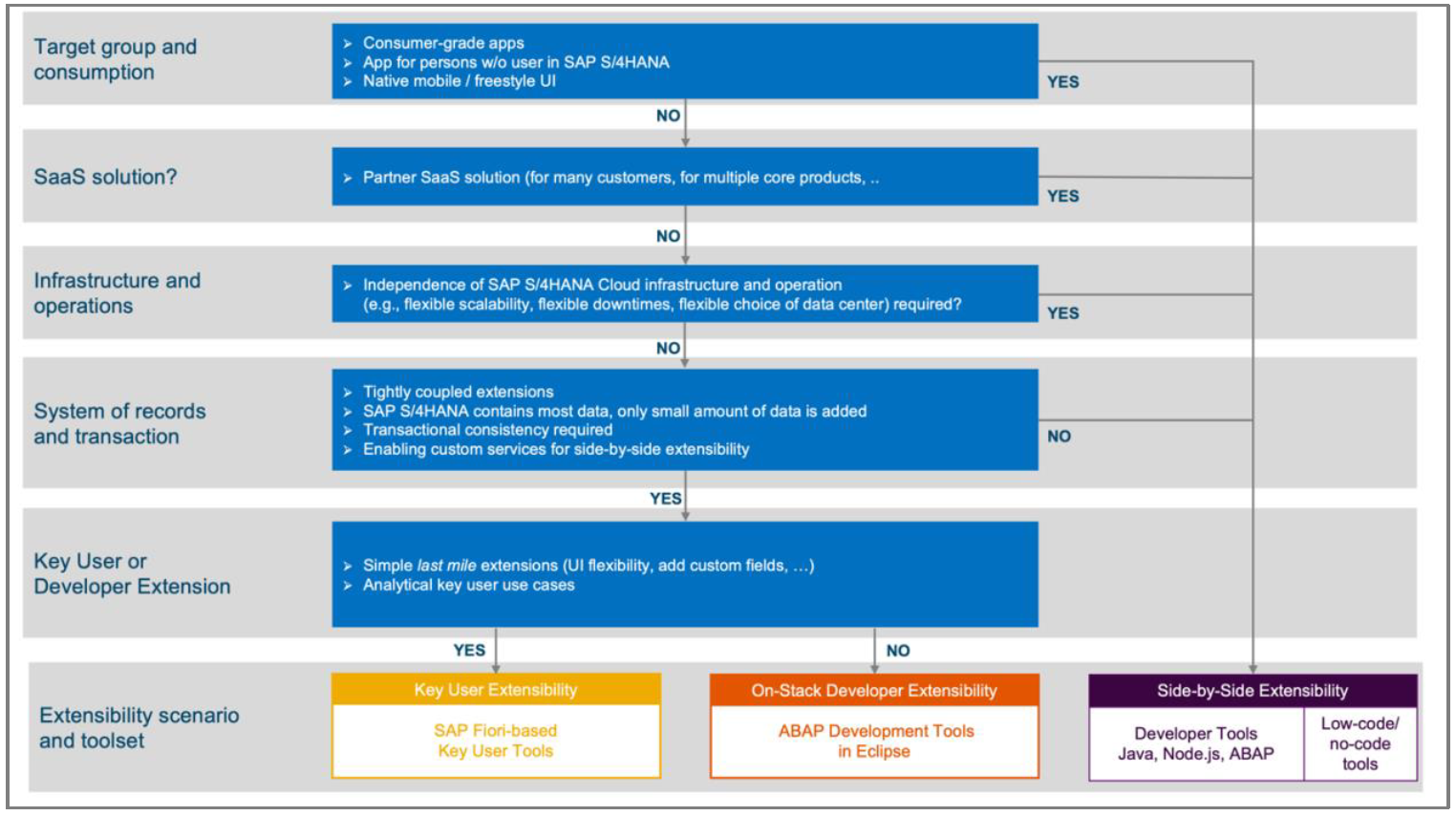 Solution shall be provided as a cloud service operated by a partner.

This use case can only be realized separated from the SAP S/4HANA Cloud operation model.

Does extension have limited scope and can be built by key users without coding and full development project?

Consider the knowledge and experience of your development teams

For SAP Partners and customers having ABAP skillset, building extensions with Embedded Steampunk and side-by-side extensibility with Steampunk can be an easy task. For new age developers, who are more comfortable with languages like Node.js, Java, Python etc., side-by-side extension on BTP cloud foundry environment might seems an easy pick.

Balance between homogenous versus hybrid extensions

Customers and partners must find the right balance between homogenous (only on-stack or only side-by-side) versus hybrid (mixture of on-stack and side-by-side) extensions.

Homogenous extensions should be preferred for simpler lifecycles, but in some cases, hybrid extensions are the best solution.

We may use Uses Key user Extensibility to build local tailored remote service for a side-by-side SAP BTP solution.

With this, we have all the 3 extensibility options available in SAP S/4HANA Cloud, Private Edition and On-Premise.

At the same time, classic extensibility is also available there.

The main reasons are:

Because of the reasons mentioned above, we need a feasible compromise for S/4HANA Private Cloud and On-Premise. The fundamental principle is that ABAP cloud and ABAP classic code can coexist since the ABAP language version is defined on ABAP object level.

This offers a gradual transition from the classic to the cloud extensibility model.

Mitigation of missing local public APIs or extension points. Here, custom wrappers for non-released SAP objects are built and released for cloud development so that they can be used in tier 1.

Once SAP provides a public local API, the custom wrapper can be removed. In this sense, tier 2 serves as an extension to tier 1 which will follow the same ABAP cloud development model besides the usage of the wrapped non-released SAP object.

Classic extensibility based on classic ABAP custom code that is not supported in the ABAP cloud development model. The goal is to avoid and reduce developments in this tier to minimize the risk of upgrade issues. Guidance on how to achieve this for transformed legacy code is given in the next chapter.

I hope by now you will have a clear understanding of the con­cepts of SAP S/4HANA Extensibility.

To know more, you may refer to below links.

How to use Embedded Steampunk in SAP S/4HANA Cloud, private edition and in on-premise – The new ABAP extensibility guide

If you have any queries, let me know in comment!