In the last year I’ve been part of a project where we merged SAP systems of two companies into one. Eventually we ended up with one main S/4 HANA 2020 system, an SAP Business Suite for SRM and one for HR. During this project I was involved with the Fiori Launchpad setup. As we still had multiple backend systems, we had the strategy to provide a single point of access for all end-users. The end-user should not care about the backend system! With the on-premise launchpad we were not able to provide one single launchpad to the end-user, we would have one for each backend. Even with a central Front-end Server this was not possible because of the different version of the backend systems. Therefor we decided to go for the SAP Build Work Zone, standard edition (also known as BTP Launchpad Service) to provide a central Launchpad.

In this blog post I want to share some insights on our strategy, architecture and lessons learned.

For this project we’ve chosen to use the SAP Build Work Zone, standard edition (also known as BTP Launchpad Service) to be able to provide one single launchpad to our end-users. With this Launchpad you can configure multiple backend systems to one Launchpad. An end-user will access the launchpad, open an app and will not know which system he is accessing behind the scenes. One could navigate back to the homepage and open another app which is loaded from another backend without noticing. One launchpad with multiple backends without the end-users has any clue, isn’t that not just great?!

How does this work in the SAP Build Work Zone, standard edition (also known as BTP Launchpad Service)? Compared to on-premise and NEO it will load the apps from a content provider. In NEO you could activate business packages and the apps are available as part of the launchpad. With the new BTP Launchpad service this is not the case anymore. You must connect all your backend systems as a content provider at design time. While at runtime it will load the full app from the backend and bring it to the end-user. 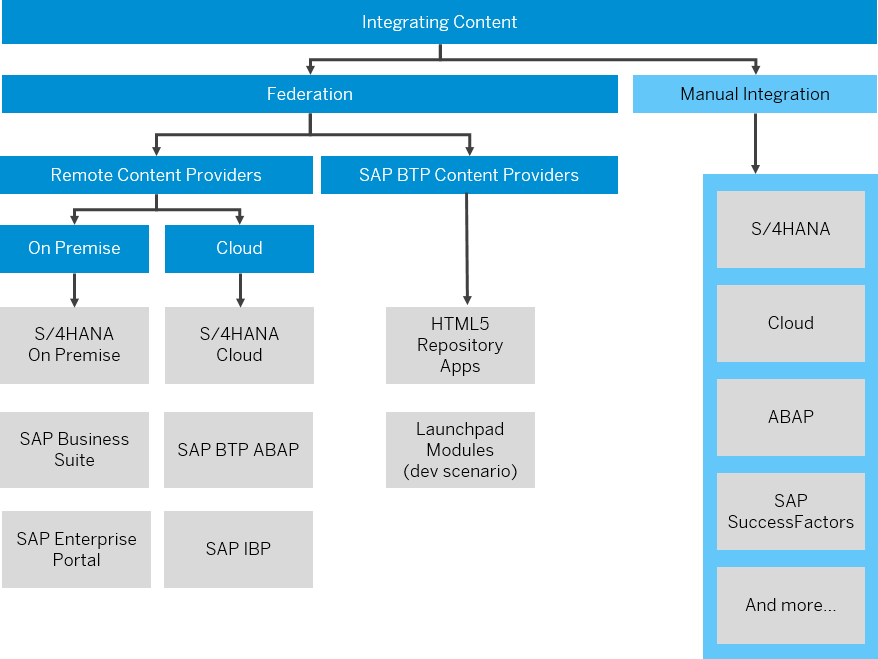 I have this image from the following resource:

As part of our Fiori strategy, we installed/activated the embedded gateway on all backend systems. This makes our central gateway redundant, one system less in the landscape. On the other hand, we needed to upgrade the backend systems with FES 6.0 SP04 to be able to integrate it into the launchpad as a content provider and use the federation service.

With this project we are providing more than 500 Fiori apps to our business coming from 3 backend systems. Most of them are coming for the S/4 HANA 2020 systems, some from the SRM backend and some from the HR backend. For this we configured the following architecture, 3 backend systems with embedded gateway connected to the launchpad as a content provider so we can use the federation service: 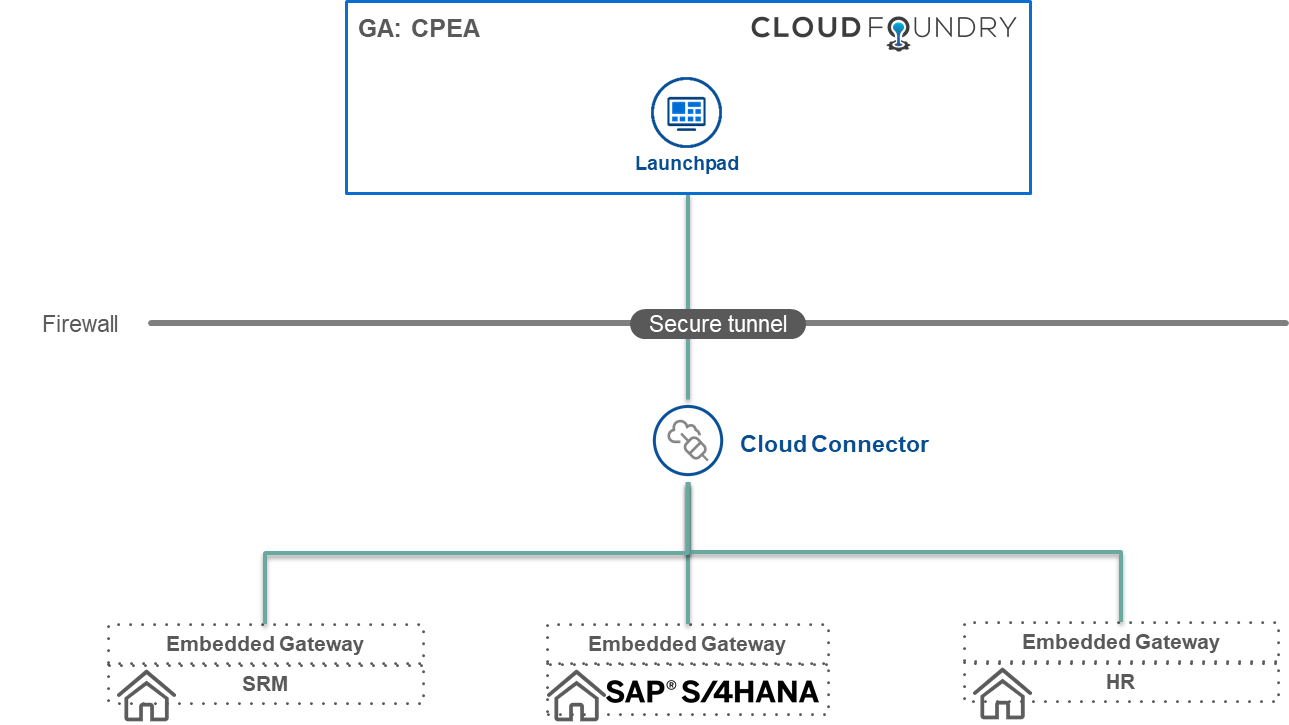 Connecting systems is one thing, we also have different application types which we all want to show together in the Launchpad Service. Depending on the type of an app we must take different actions for activation but also define a different strategy. We categorized the apps based on the type of app:

For each type of application, we had to decide the source system. Some types of apps did not give us options while others could be deployed to multiple places. Each category has the following options:

In the end we decided to keep standard apps, extensions and WebDynpro apps on-premise (not many other options). While for custom Fiori apps we went for BTP for the following reasons:

This results in the following architecture: 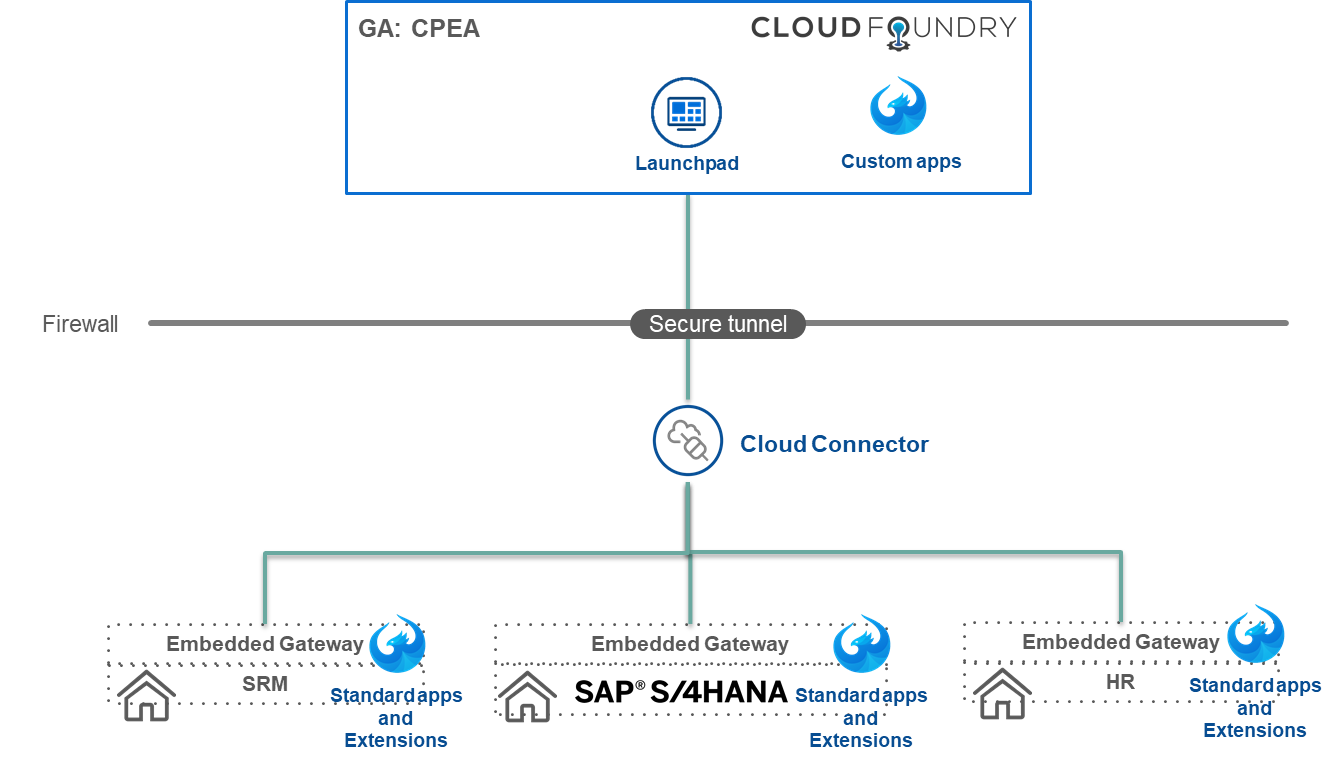 This also requires a good architecture of the BTP landscape. You’ll have to provide developers access with the possibility to deploy to the Development account with the right authorizations. Developers need to be able to transport to your test environment but maybe not production. We configured the BTP landscape in a way that we separate administration tasks from developer tasks and still make sure the developers can do all their tasks. I’ll share more insights in another blog post about this.

During this setup we learned some interesting lessons 😊. First and most importantly, do not rely on the roadmap of SAP… it changes not in a positive way. We counted on the BTP spaces and pages which is still not available. In the meanwhile, we have a workaround which makes everything even more complicated.

Besides that, the performance is not as good as our current on-premise launchpad… This is because the on-premise launchpad loads a part of the resources during startup while the BTP Launchpad Service has to load everything the first time you open an app for a specific backend. At least, this is the feedback I received from SAP.

From technical point, I understand that performance is slower than on-premise. But how do you explain this to the end-user?

We also faced a lot of connection problems because of timeouts. Eventually we were able to solve this by adding the launchpad as a trusted domain in BTP:

Would you not expect this happens out of the box when activating the Launchpad Service? We opened an SAP note for this and if I would not have told them they would still be searching for it….

In the end, nothing can beat a single point of entry with the user not knowing that one is accessing multiple backends from in the same launchpad!

With this setup also comes a good BTP landscape setup for the deploying the UI5 apps. In one of the next blogs posts I will share more details on the landscape.

I will also share the proxy script to be able to use spaces and pages even if it is not available in BTP.

Last but not least, I’ll share some details on the migration scripts for UI5 apps from on-premise to BTP.