Developer extensibility is a new extensibility approach that allows ABAP developers to create upgrade-stable custom ABAP code in cloud and on-premise environments. It delivers flexibility beyond key user extensibility and can be done directly on the software stack using the ABAP Development Tools (ADT) via local released APIs.

RAP extensibility is one use case of developer extensibility. It allows extending a RAP business object – either by adding extension fields, extension behavior, or extension nodes.

RAP extensibility relies on the C0 release contract (extend). Development objects, such as DDIC objects, CDS views, or BDEFs, that are released under the C0 contract guarantee stability at dedicated extension points. Only C0 released APIs can be extended from ABAP for Cloud Development. 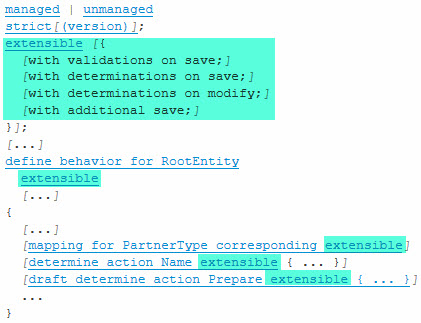 If your BDEF is extensibility-enabled in this way, the most important part is done. There are some other rules that are checked during a C0 release, such as the following:

An exhaustive list of C0 prerequisites can be found in the ABAP Keyword Documentation under C0 Contract Rules for CDS Behavior Definitions.

The following CDS behavior definition name is based on the CDS view entity name and it fulfills all requirements for C0 release :

This example is taken from the ABAP Keyword Documentation and it is part of the package SABAPDEMOS.

BDEF extensions are allowed in accordance with the extensibility scope defined in the original BDEF, and they must comply with the naming rules. For example, a BDEF extension and all of its elements must use the same namespace prefix.