Have you wondered if Mathematical Optimization software like MIP Codes from FICO-Xpress or Gurobi can be easily deployed on SAP BTP Runtimes, just as ML loads. The answer is yes, you can.In this 2-part blog we will walk through quick and easy steps to deploy on 2 of the BTP Runtimes 1. SAP’s AI Core via the AI Launchpad 2. SAP Kyma (another blog post).

The steps to create the Docker image are the same for both deployment options in the two runtimes. Infact once you have created the docker and pushed to docker repo, you can use the same image for AI Core or Kyma.

AI Core has some set of requirements in terms of naming end points and ports that are exposable, however these restrictions serve useful in having a prescribed format and do not cause any un–necessary overhead hence I prefer to have the same Docker image which can be easily used by either runtime.

Mathematical Optimization techniques are widely needed to solve a wide range of problems in decision making and finding optimal solution(s) when many exist.Besides the many real world complex problems that depend on Mathematical Optimization, these techniques are also increasingly being used to enhance Machine Learning solutions to provide explainability and interpretability as shown by for example

These techniques are useful when for example it is not sufficient to classify credit scores or health scores into good or bad but also provide what can be changed to make the classification go from bad to good.

SAP Products like SAP Integrated Business Planning incorporate optimization in the supply chain solutions. For other problems where you need to extend the solutions and embed ML or Optimization, this blog post walks through the steps of easily installing third-party libraries on BTP so these solutions can be integrated with the enterprise solutions which needs these capabilities.

The subsequent step is to include the development artifacts into an existing project structure, for which the SAP AI Core SDK way might be better suited. Since this step is highly project dependent it is not covered in this blog post.

We will create a docker image to solve a simple problem of coin changing using one of three ways:

We do not need all the 3 libraries but we add them to show the deployment method is the same. In the example provided here you can choose to install either only 1 or only 2 or 2 and 3 as pyomo does not come with a solver of its own.

The library you choose would depend on your use-case and which of these is your preferred way of working. There are of course other optimization libraries, for this blog post I chose the above 3 for their ease on installation as they are all on pypi and come with community licenses which can help get started. For productive use you would need to obtain commercial licenses for FICO-Xpress or Gurobi. Pyomo is BSD but does not come with an optimization solver of its own, and is useful if you have not yet decided on the solver itself. In my example since we already install Gurobi we would also use it via the Pyomo interface as the solver.

If you have highly non-linear problems(higher than Quadratic) as in the chemical industry, FICO-Xpress would be a good option with its SLP and Knitro solvers.

The aim of this blog post is not to solve large and challenging optimization problems, but to facilitate deployment of optimization solutions in productive environments using SAP BTP Runtimes. We will solve the problem of change making using one of the 3 libraries above. Real world problems would be harder and longer lines of code, this problem is chosen as it has solutions which can be checked easily which is handy when you are getting started. The real problems would have their own version of optimizer.py but the deployment mechanism would be very much the same as this sample.

The change-making problem addresses the question of finding the minimum number of coins (of certain denominations) that add up to a given amount of money. For the example we will use pennies, nickels, dimes and quarters. So for example for amount of 101 cents the optimal coins would be 4 quarters and 1 penny.

Here are code snippets which solve this for the 3 libraries, the input is the amount that needs to be converted. Its in a file calledoptimizer.py

You can choose only one the 3 options if you do not want all 3 library options.

Now we will need a main app to call the above functions, we put it in file call app.py

SAP AI Core requires the endpoints to have a format with /v<number>/ but the name is upto you. Here our main entry function we call callOptimizer with route /v1/callOptimizer. We will need this later to test.

Now that we have the code ready, we can create a docker file Dockerfile. All the installation dependencies for the Docker image are placed in requirements.txt

Now we build and push the docker image for example like this.

Create the Deployment Script on GitHub

Now we are ready to create the deployment. Depending on the usecase we can deploy the optimization code as a WorkflowTemplate or a ServingTemplate. For this example since the problem solving time is sub-second I will deploy it as a ServingTemplate and send the amount as a parameter to the API call. This enables quick testing. For larger optimization problems which require more resources and done as batch jobs they should be deployed as a Workflow and then we would not have functions in app.py which expect request objects.

The workflow is in a file callcall_optimizer.yaml which needs to be in a Git Repo.

Some of the key differences for an Optimization deployment vs an ML Inference Deployment is that the Optimization deployment does not refer to a pre-trained model or have storage artifacts related to it.The only configuration parameter above is choice of optimizer. This is again not mandatory but shows how you can add your specific parameters you would want to configure when running the model.

Here are few configuration changes that are key to understand as they describe what the deployment can do.The yaml defines the following

For larger optimization problems that we do as WorkflowTemplates we can save results for an optimization run and then use these to warm-start subsequent runs. In this case we can use the same mechanism as ML Models for persistency, here we save solutions that can be improved upon and not models.

Create the Deployment on SAP AI Core via AI Launchpad

Onboard GitHub with deployment yaml to SAP AI Core

In the Launchpad the Git repo in the SAP AI Core Administration looks something like this, the values of course depend on your git repo 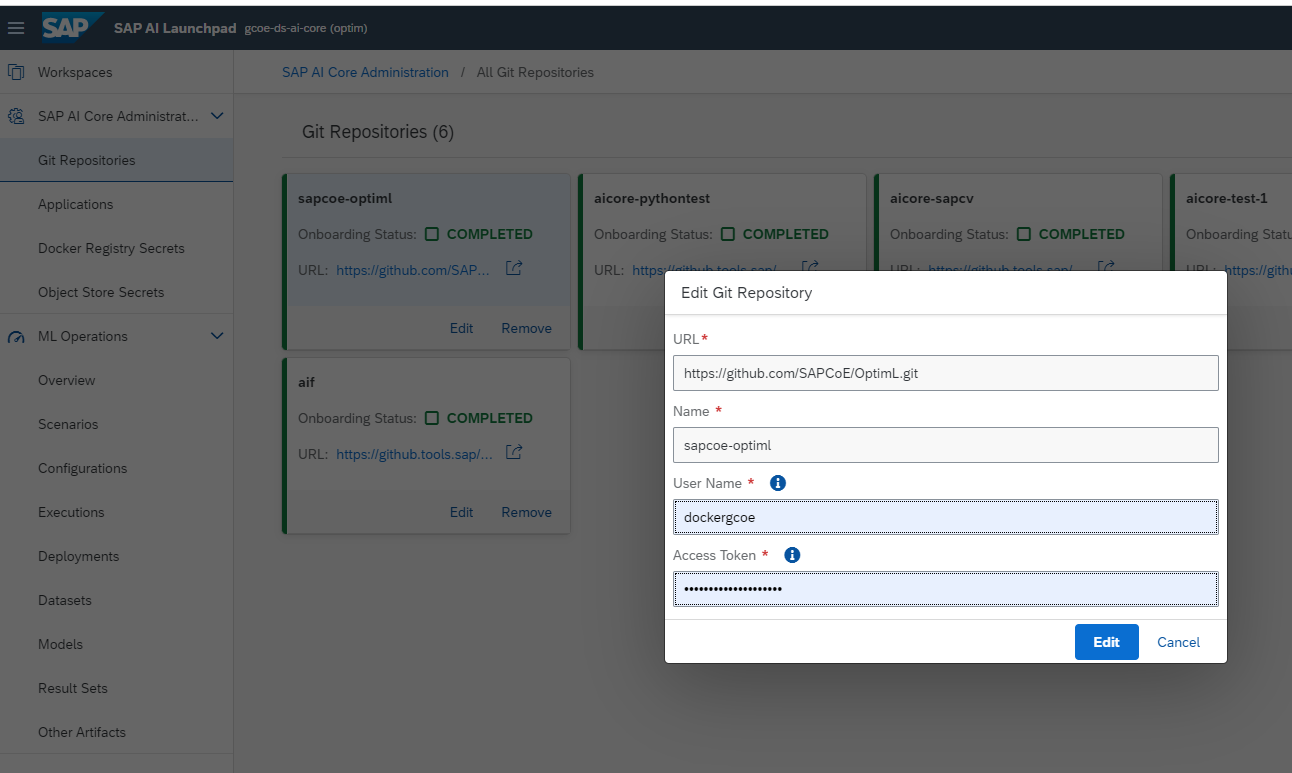 Now we will add a corresponding Application for this workflow. Go to Applications on AI Launchpad and click Create. For reference these steps are described in Step 5 of Quick Start for Your First AI Project Using SAP AI Core.

Change the entries based on your setup 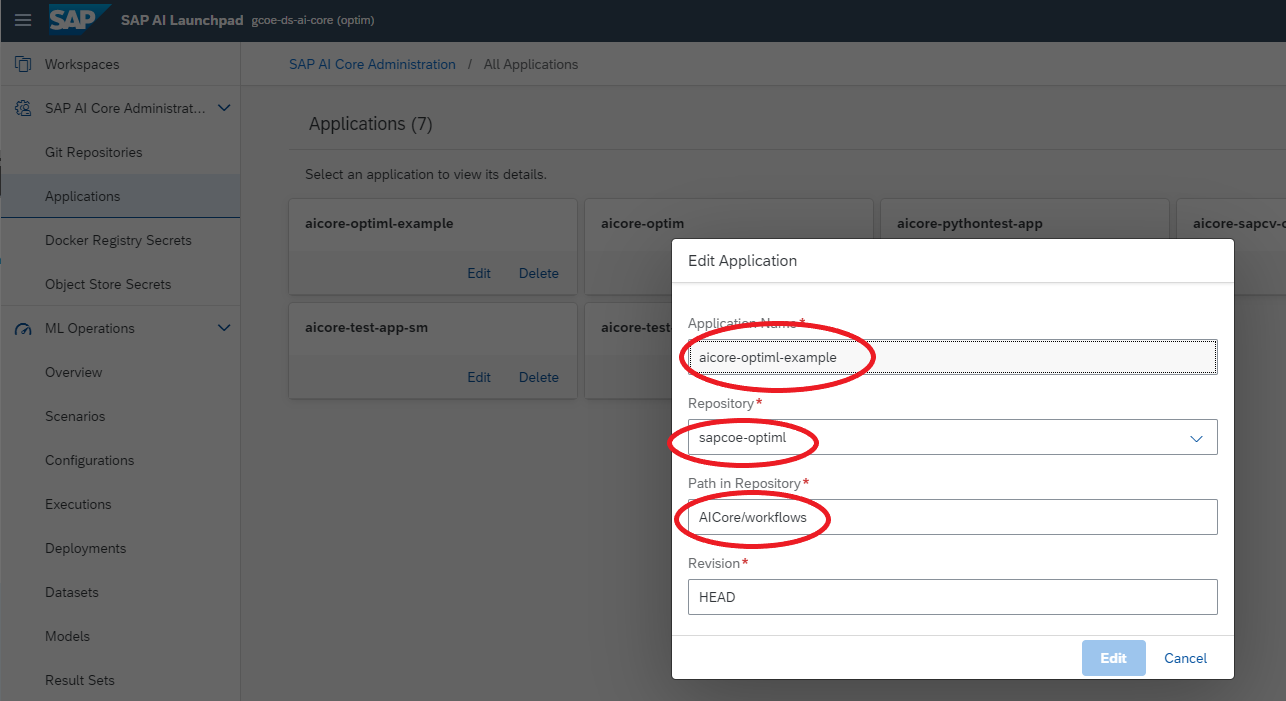 Run the AI Workflow for Optimization

Next step is to create a configuration for this scenario. The scenario gets created from the yaml file without any user input. Now we just need a configuration that can be used for deployment. The only parameter that we had in the yaml file was to specify which optimizer we want to use by default, so that is the only parameter we need to specify and we are ready to deploy the optimizer.

The version shown will depend on what is in the yaml file in the field: ai.sap.com/version 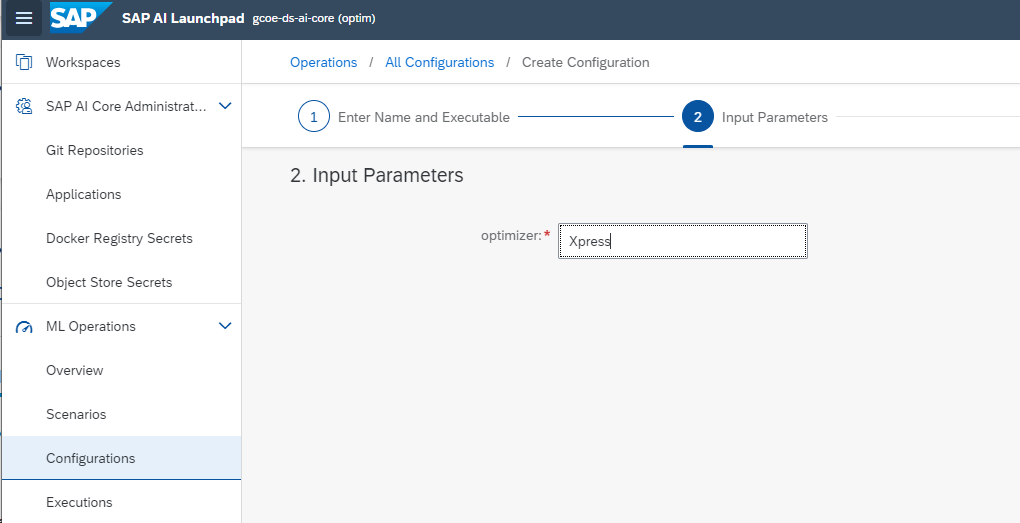 Optimizer Selection: Enter one of Pyomo/Gurobi/Xpress

Once you have created the config you can directly create Deployment 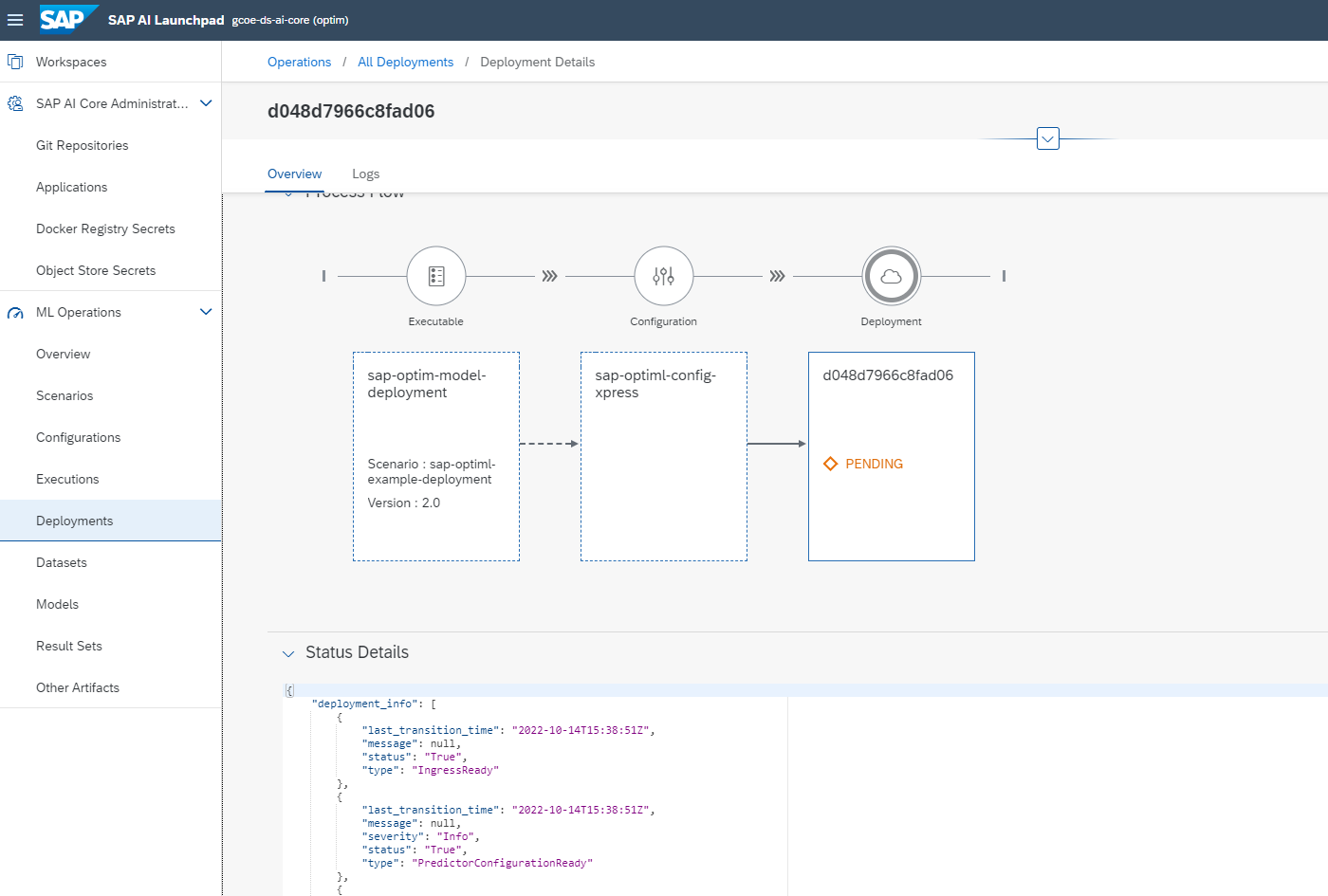 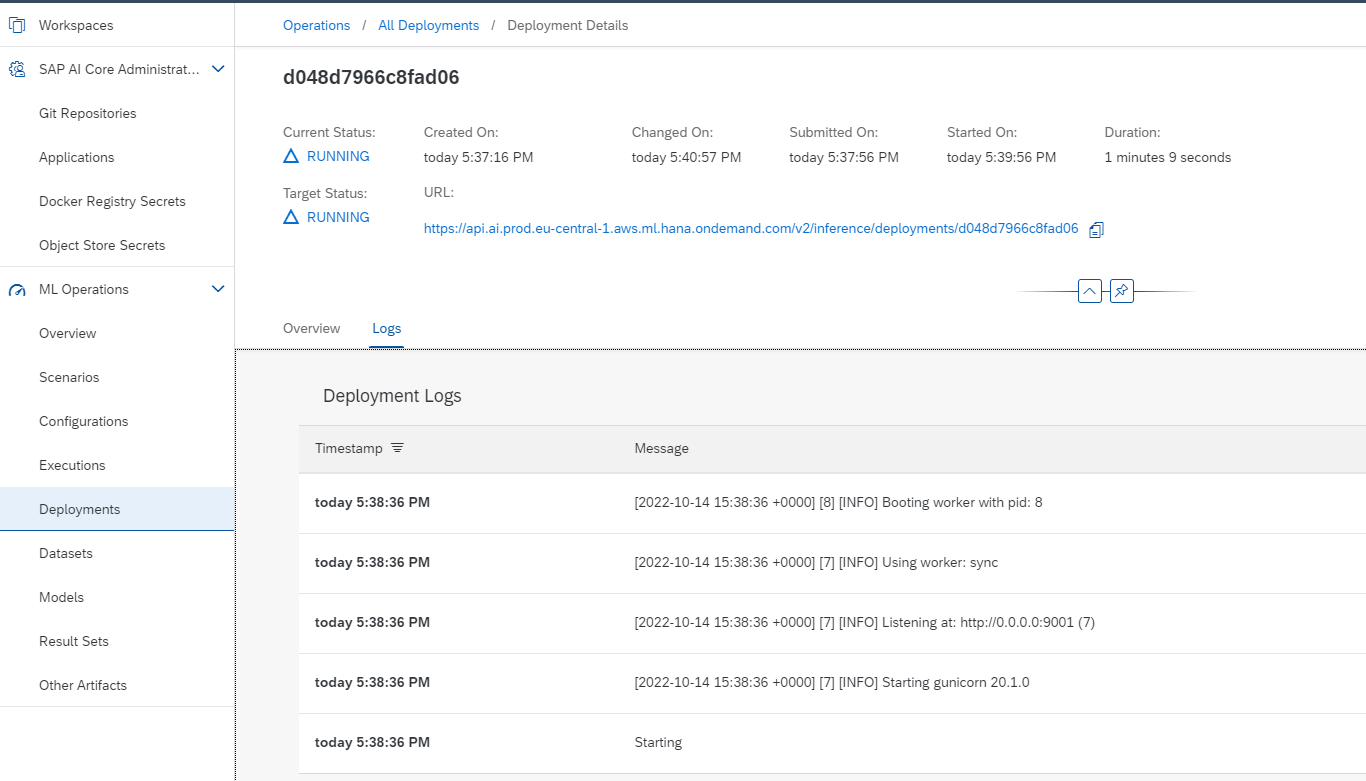 The logs will show the status of the deployment, incase there are any errors these would show here too.

The above also provides the url we will need for testing. The steps to test are same as testing any AI Deployment as described in Step 5 of Tutorial on AI Core Deployment

If you save the service key in a file called say aic_service_key.json and have installed ai-api-client-sdk (which is available via  pip install ai-api-client-sdk). The steps here are for python notebook but you can follow the Postman route if you prefer

We will use the endpoint /v1/callOptimizer (note this is the function you had created in the app.py) 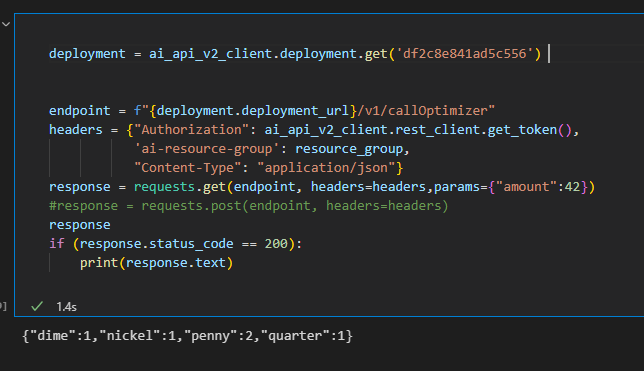 In the AI Launchpad you can see the detail logs for this call. The optimal objective is 5 (seen in the logs below) as we used 5 coins to make 42 cents, corresponding to the API call above for amount of 42 with the optimal change being 1 Quarter, 1 Dime, 1 Nickel and 2 Pennies as seen above. 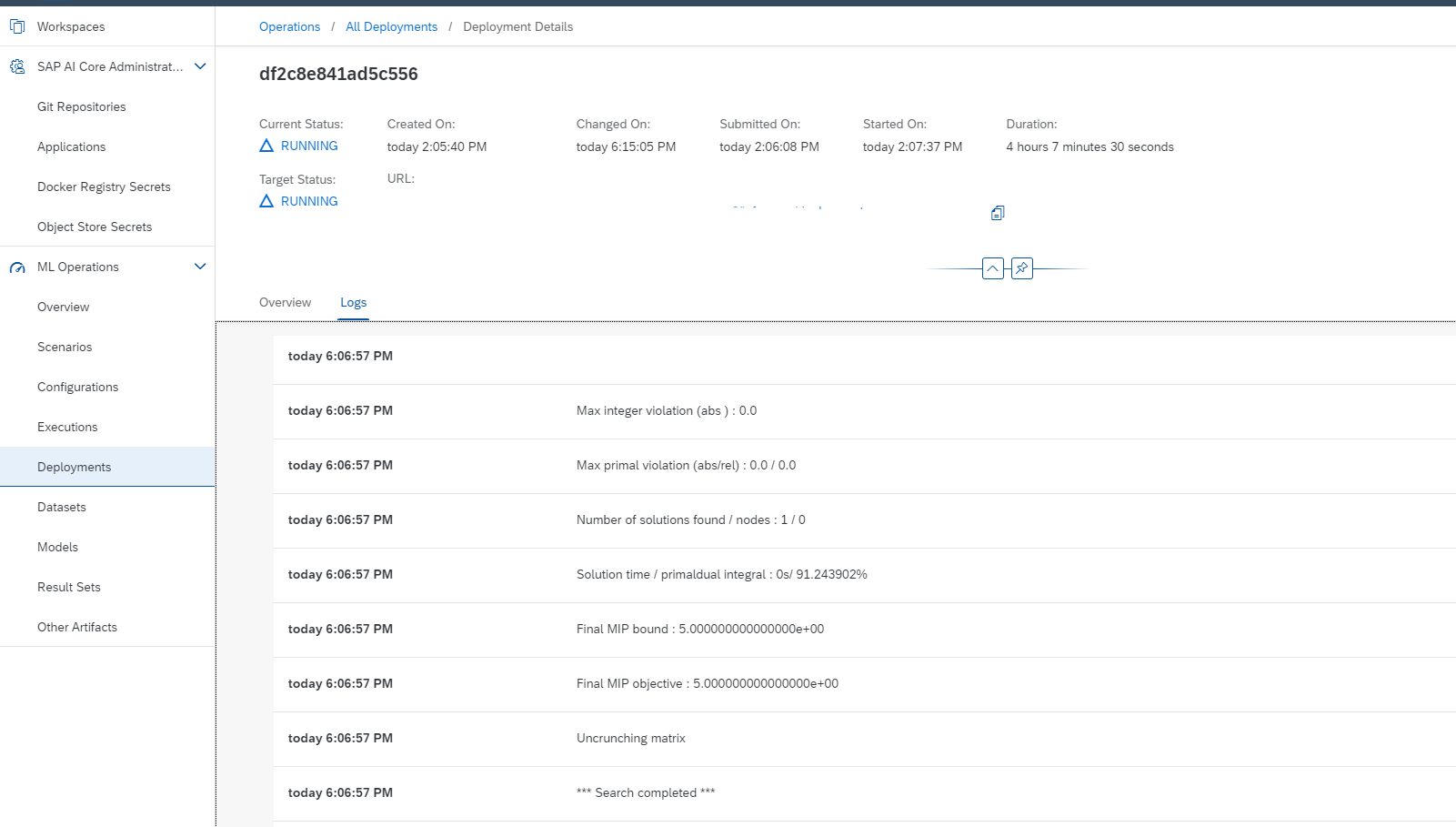 When to use SAP AI Core for Optimization Deployment

SAP AI Core is well-suited if you have Machine Learning models running on SAP AI Core and it is desirable to consolidate all intelligence enabling applications to be managed from a central place.

In some cases input for the Optimization models comes from Machine Learning models, so for such scenarios too its helpful to have the ML and Optimization applications be close together and possibly in the same scenario if they are related.

In addition SAP AI Core also provides capabilities for tracking metrics which are useful when you want to benchmark different optimization runs either for different solvers or parameter tuning. For more details on enabling metrics tracking in your code refer to Tutorial on SAP AI Core Metrics.