Companies trading internationally face severe risks if they fail to comply with relevant and fast-changing legal regulations. Risks include massive fines and even possible incarceration if failure is due to neglect. Companies may also be banned from market access in certain countries and regions if failing to adhere to regulations.

An embargo is an official ban on all trade or other commercial activity with a particular country or region of a country. For embargo situations, we are concerned about the transaction’s departure country (or region) and arrival country (region).

An embargo can be full or partial. A full embargo means we can never ship to any of the embargoed countries independent of the departure country. Typical examples include countries such as Iran, Sudan, North Korea and Syria. Full embargoes are supported both in S/4HANA for International Trade and SAP Global Trade Services.

For partial embargos, the departure country and even region and products may come into play. For country-specific embargoes, such as between US and Cuba, we need to define country groups to indicate illegal to and from country-pair. This functionality is not available in S/4HANA for international trade, so country-specific embargoes require support from SAP Global Trade Services.

For region-specific embargoes,  we need to rely on functionality that exists in Legal Control. In conclusion, we may therefore say that S/4HANA for international trade only supports full embargoes, whereas any other embargo types require the usage of SAP GTS.

For SPL to work properly, we need the name and addresses of all involved business partners, such as ship-to, sold-to, bill-to and more.

SPL is not supported in S/4HANA for international trade unless integrated with SAP Watch List Screening.

Export control is legislation that regulates the export of goods, software and technology.

Many governments implement export controls. Typically, legislation lists and classifies the controlled items, classifies the destinations, and requires exporters to apply for a license from a local government department.

Some export control regulations are only concerned about the finished product; other regulations also control the individual components, their origin and their value. In the latter case, we also need to store the bill of material of the controlled product. Since we can’t keep external BOMs in S/4HANA, we would generally say that S/4HANA for international trade only supports export controls on finished items. The more complex regulations such as ITAR and US-re-export require the usage of SAP Global Trade Services. 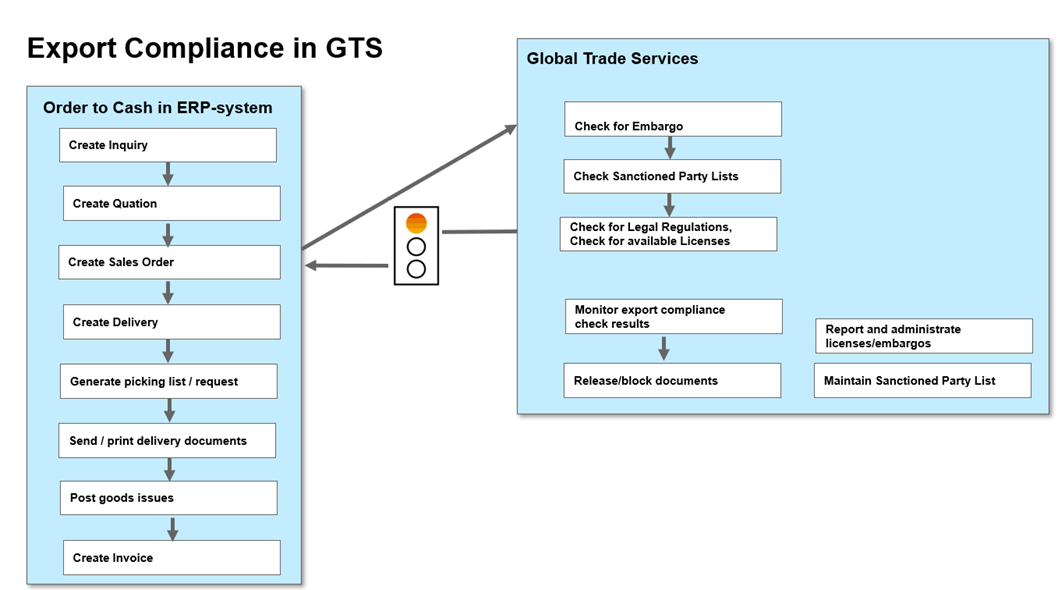 SAP Global Trade Services is the obvious choice for customers facing medium to complex trade regulations. Companies with minor and basic requirements may, however, manage with the core functionalities provided S/4HANA for international trade, supplemented by the SPL-functionality in SAP Watch List Screening. Hopefully, this overview will be of help when making the decision on which solution to rely on for trade compliance.

Please follow me for future posts on Global Trade Services and S/4HANA for international trade.