Interpersonal communication and business processes go hand in hand. When products integrate intelligently and purposefully with communication platforms, business users benefit from increased productivity and a greater variety of ways to achieve their business objectives.

Microsoft Teams, a communication platform used by many SAP customers, is a prime target for integration with SAP systems because of its wide user base and extensive support for custom apps. However, creating a custom app that integrates SAP systems with Microsoft Teams still requires a significant amount of development effort and expertise.

Developers are forced to spend time designing a UI, figuring out which APIs and services are best to use, and learning about all the intricacies of deploying an app to Teams. Unfortunately, all these ancillary tasks prevent the developers from focusing their full attention on solving the core problems and inefficiencies that created a need for a custom app in the first place.

As developers, my colleagues and I from the Strategic Customer Engagements team of SAP’s Platform Adoption & Advisory group (PAA SCE) have worked on many custom integration projects for SAP customers. Many of these projects would have been too time consuming or difficult had we been unable to take advantage of SAP BTP frameworks, such as SAP Cloud Application Programming Model (CAP), to speed up our development. Through our development experiences, we recognized that a framework in the area of integrating with communication platforms is sorely needed.

Thus, our project, the Bridge Framework, aims to provide developers with a framework that drastically simplifies and accelerates the process of deploying a custom SAP app to Microsoft Teams.

The is an integration framework deployed on SAP BTP that allows developers to quickly customize and deploy apps that bring the powerful business logic of SAP products to the convenience of Microsoft Teams.

The Bridge Framework supports integrating with SAP systems through BTP services that developers may already be familiar with: SAP Integration Suite, SAP Graph, and SAP Destination service. Simple object mapping configurations within the framework provide developers with the ability to access business objects through any of the supported services. The framework does not enforce limits on which services to use, so developers are free to decide which API works best for them based on their business needs.

Furthermore, the Bridge Framework provides an out-of-the-box UI that is intuitive and easy to configure, all while adhering to the design and styling of Microsoft Teams. 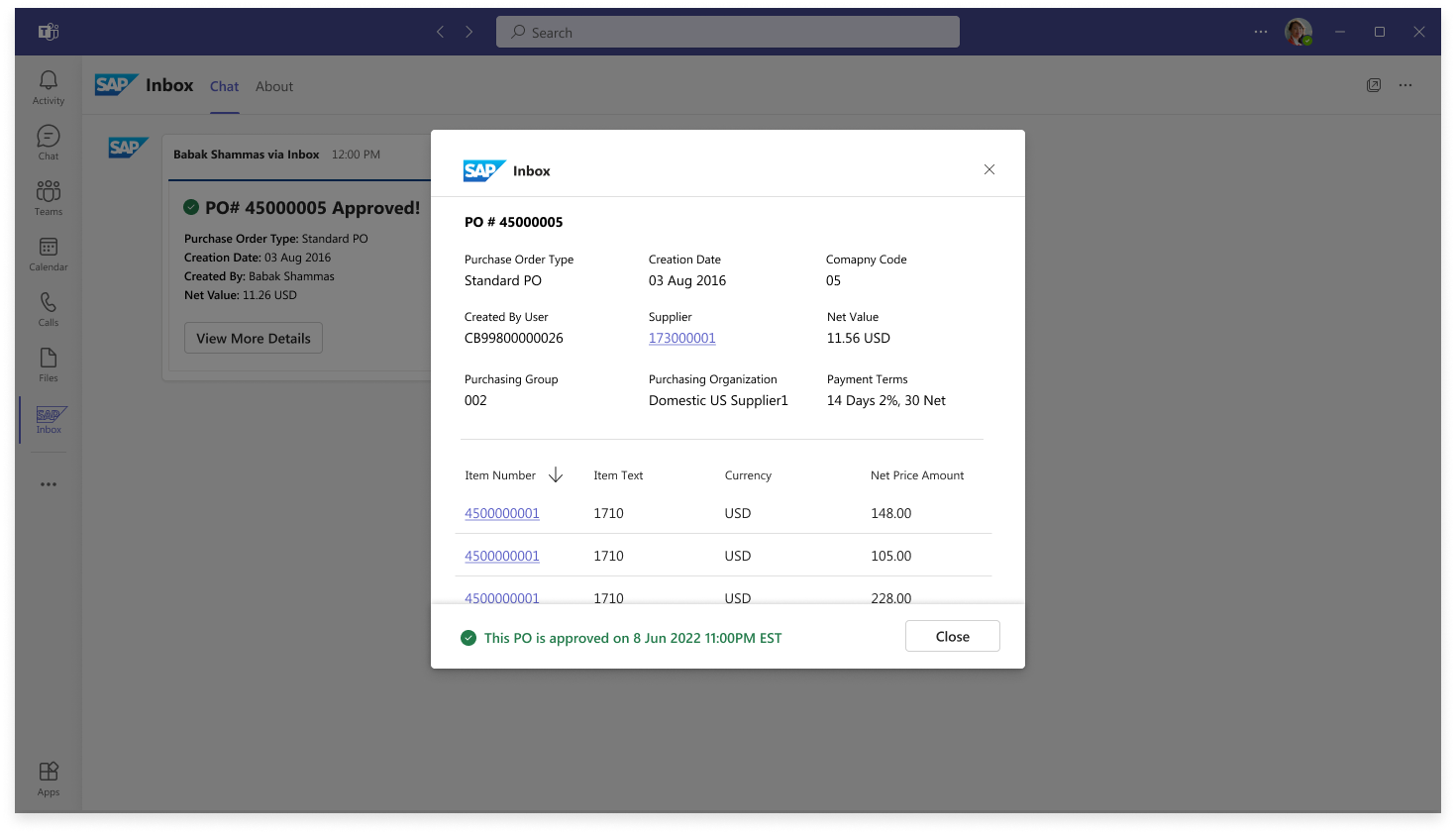 The Bridge Framework has already been used to power the development of a Teams integration solution for our customer, Siemens. You can read more about that solution in a blog, published by my colleagues, entitled “S/4HANA Integration with MS Teams via BTP: A Siemens Experience Story.”

A Basic Diagram of the Bridge Framework on SAP BTP

After the initial setup, a developer using the Bridge Framework will be able to create a new app in 4 steps:

Perhaps the easiest way to illustrate the usage and benefits of the Bridge Framework is by providing a simple example of a use case for the framework.

Anne is a manager for the R&D wing of a large widget manufacturer. Anne’s engineers and specialists are often the first to recognize the need for new materials, so they make extensive use of SAP S/4HANA to create purchase orders.

Anne, in her role, uses a much smaller subset of SAP S/4HANA features than her engineers and specialists. For example, her primary interaction with SAP S/4HANA is visiting her inbox to see if there are any purchase orders for her to review and approve.

Due to her busy schedule of meetings and other managerial responsibilities, Anne prizes convenience and efficiency. She does most of her work through meetings and chats in Microsoft Teams, so, naturally, she would prefer to complete SAP S/4HANA workflows directly in Teams. Furthermore, Anne recognizes that if she could review purchase orders directly in Teams, she would be able to conveniently start a chat or meeting with her team members to seek clarifications about a particular purchase order before she approves or rejects the order.

Anne believes that a custom Teams app integrated with SAP S/4HANA would boost her productivity and enhance her ability to make informed decisions. However, when Anne presents the idea for such an app to the widget manufacturer’s CTO, he is skeptical of the idea. He points out that creating an app for Anne would take a large amount of time, money, and development resources. Even worse, he points out, once released, the app would likely have very few users because of its highly specific use case.

Ultimately, Anne’s idea for an app is scrapped and she continues with the status quo. But it doesn’t have to be this way!

Developing a Teams app that integrates with SAP systems without the Bridge Framework would look like this:

Developing a Custom Teams App without the Bridge Framework

The process above results in a custom app that not only took a long time to develop, but also resulted in a product that is difficult to reuse for future Microsoft Teams and SAP system integrations.

In contrast, developing a Teams app that integrates SAP systems using the Bridge Framework could look like this:

Developing a Custom Teams App with the Bridge Framework

Teams apps developed using the Bridge Framework only require limited configuration and can be deployed quickly. Using the framework saves developers the hassle of having to go through an entire development process; a process which, no doubt, includes the frustration and productivity loss of bugs and testing.

Ultimately, the Bridge Framework saves enterprises time and money. It greatly simplifies and accelerates the development process for apps integrating SAP products with Microsoft Teams by providing developers with the following key features:

The Bridge Framework is still in its early stages, so initial development and support has focused on integrating with SAP S/4HANA. However, integration with other SAP products, such as with SAP SuccessFactors, is under development. Some important features and SAP systems may not be available yet.

An early version of the framework will be released as a repository on the SAP Samples GitHub in the next several days. Check out the repository and its corresponding documentation to get started. As mentioned previously, make sure to also check out the blog, written by my colleagues, entitled “S/4HANA Integration with MS Teams via BTP: A Siemens Experience Story,” detailing how the Bridge Framework powered a purchase order productivity solution for our customer, Siemens.

If you have any questions or would like to learn more about the Bridge Framework please reach out to me, leave a comment, or send an email to ci_sce@sap.com.

I would like to thank Kyungwoo Hyun, Feng Liang, Adarsh Hegde, Weikun Liu, Kyle Xue, and Alex Bishka for their work on developing the framework. Sandesh Shinde and Jie Xiong for their design work. Dante Alipio and Michael Troy for reviewing our blogs. And, finally, Sivakumar N. for managing and guiding this project.