Some while ago there was already a blog on the rising use of factories and factory injection in the area of TM planning and as time passed, I want to continue the path of extensibility enablement in the transportation cockpit.

With 2021 we introduced a concept which decouples common code from certain specific handling which need to be done for certain object or action.

The concept work as following:

With that in place new actions only need to implement the interface and plug into the existing code w/o the need to touch that one.

How to use this concept

New button in the transportation cockpit

Now if you want to create a new button in the cockpit, you need to do the following:

1) Create a new class implementing the interface (best also inherit from our base super class) and redefine the methods needed.

In a small example I implemented the action handler for a new button in the application toolbar:

In my example I added the new button to the application toolbar for the transportation cockpit.

3) After adding the button in the customizing it will appear in new created page layouts. Be aware that existing page layouts will only display the button after you updated them using the application “Synchronize Page Layouts with Customizing”. 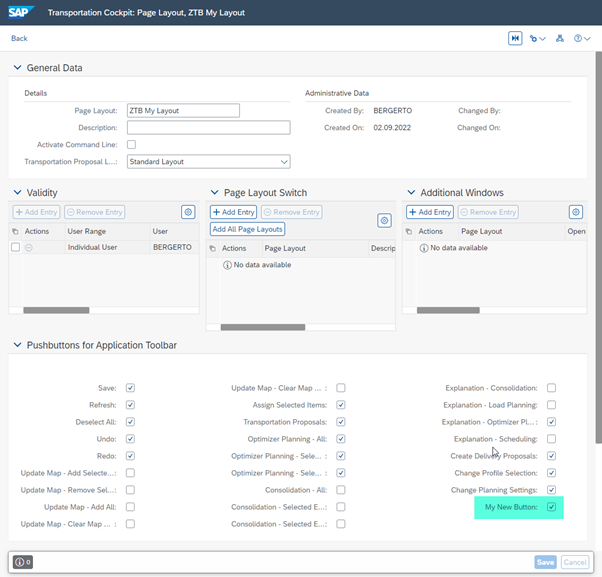 After adding it to your page layout you can go into the transportation cockpit click on the button and consume the code you have written.

The new Button can Directly be Used

Overwrite or enhance a button in the transportation cockpit

After having explained how the concept enables you to add own buttons, I also want to tell you that for cockpit actions we went one level further.

As we know lot of customers want to enhance or change the behavior of standard buttons. Therefore, we introduced an additional priority concept in which you can give your classes a higher priority to the priority used from SAP standard.

The basic idea works on the same premise. You also create a class for action handling but this time you populate action IDs which are already covered from standard classes.

Additionally you now need to redefine the method /scmtms/if_factory_priority~get_priority to make your class more important than the standard one (keep in mind that lower priority value is more important and will get respected first).

In the following example I exchanged the “Assign selected items” button with just raising a method. For sure I could also called the super code if I would just want to add my message to the standard execution.

I hope I could show you how easy enhancing the transportation cockpit got already. You can now add a new button with own logic or exchange a standard functionality w/o the need of any explicit enhancements. I hope you can use our improvements in your projects

I guess the decoupling of the TM code in similar ways just begun and we will further process it in future. The priority concept will be more rarely used at places we expect customers also to consume it.

Feel free to comment if you have ideas where this concept should enable you to plug in own developments easily.