I have not blogged in a good while and figured if I came back, I better drop a banger (that’s what the “kids” call it, right?). Well, I guarantee you, this one is quite a doozy! (that’s what the “old folks” call it, right?). I will worry about which crowd I most appeal to later. For now…..let’s do this! I am about to rock your world and show you a “new” way to make printing your FPM forms for HCM P&F a whole lot easier….like super simple easy! Don’t believe me? Read on!

Way back when SAP announced and released the FPM options for HCM Processes & Forms which effectively replaced Adobe Interactive Forms, the world rejoiced. When SAP said “nuh uh uh…not so fast” and let it be known that the only way to “print” FPM forms was to develop and Adobe form/layout in parallel and assign it in the configuration, the world let out a collective sigh. That just did not sit right with us HCM P&F folks. In fact, I can say that in all of my projects implementing FPM HCM P&F processes, not a single one ever implemented the “Adobe print form option”. Not ONE! In most cases, the customers would tell their users either:

That was just the understood way it was for years and years…..and well…..up till now. At many times over the years in my “free” time (what a laugh!), I attempted to tackle this “print” problem for FPM form type processes. I looked at it from all kinds of ways. I would get into it for a bit and then just back away (sometimes just throwing my hands up and giving up). Recently, my current client brought up their need to print again. Once again as I had done many times in the past, I rattled off the standard answer explaining the limitation directly as stated by SAP (as did others on my project team who were now very familiar with answering this question from our business users). Just for “grins and giggles”, I decided to give it another look…..one more go of it……and low and behold, I found a solution!!!!

Before I got into the nitty gritty details, I hope you are surprised at the mere fact that there is a solution and someone bothered with solving it all these years late. Furthermore, I hope you are dismayed to hear that it actually as easy as ONE line of code. I will say that it actually was not possible till a fairly recent update (nw7.3 ehp1?) by SAP of their own standard Webdynpro ABAP (WDA) classes and interfaces (IF_WD_APPLICATION) to include a very simple but powerful method. So why did SAP not already update their code to do this?!?!?! I have my theories:

Regardless, I do hope that “maybe” SAP will just include this into some coming patch or something. Until then, I know you really want to read about how it is done….here we go!

This solution requires that we make TWO simple standard SAP class enhancements. As said, the actual “fix” itself is just a simple single line of code. That is all it is. Prepare to be amazed!

This method determines what “events” the framework is listening to and also will define what buttons and “form utilities” options should display in the top application menu toolbar. You can read all through it, and it is actually useful to know for other things. In this code around line 171, you will see that it starts to determine if the “Generate PDF” option should show to the user in the “form utilities” options. At line 188, you can see where it checked configuration to see if we have a “print” Adobe form defined for our process (ie. “lv_form”).

If it does not find a form, it just hides the “print”/Generate PDF option from the user. Therefore, our first step is to make the menu option available even if we do NOT have an Adobe form defined for our process.

To do this, we make an “overwrite-method” enhancement of the method GET_EVENTS_4_FORM_INIT. I will not cover how to do this as it is fairly easy to out how to do and is straightforward enough. I will say when you create the enhancement, do the following:

Now that we are showing the “Generate PDF” menu option, we now need a way to tell it what to do when the user clicks this option. Hence, this method as the name implies is the “event handler” for the application. If we look in the method around line 432, you can see where it catches the “PRINT_PDF” event. Similar to the method mentioned above around line 440, you can see where it checks configuration to see if we have an Adobe form configured for the process (ie. “form_name”).

You can also see that if it does NOT find a form, it simply exits. As you might guess now, this is where we need to say “if you do not have form assigned, go ahead and print the form in our new magic way”. This single line of code is what does EVERYTHING for us!

Just as you did in the other method, you will create an “overwrite-method” enhancement. As before, create the overwrite of method HANDLE_FORM_EVENTS and first “cut-and-paste” the original standard method code into your enhancement. Again, “check” the code and make the necessary changes (ie. “CORE_OBJECT->”) where needed until you no longer receive syntax error warnings one “check”. Now, make the following modifications to the code:

Now, when the user executes the process and clicks the “Generate PDF” option without having an Adobe print form configured, they will see the following type of pop-up that looks just like their form and application window with the addition of having buttons at the top for “print” and “close”. 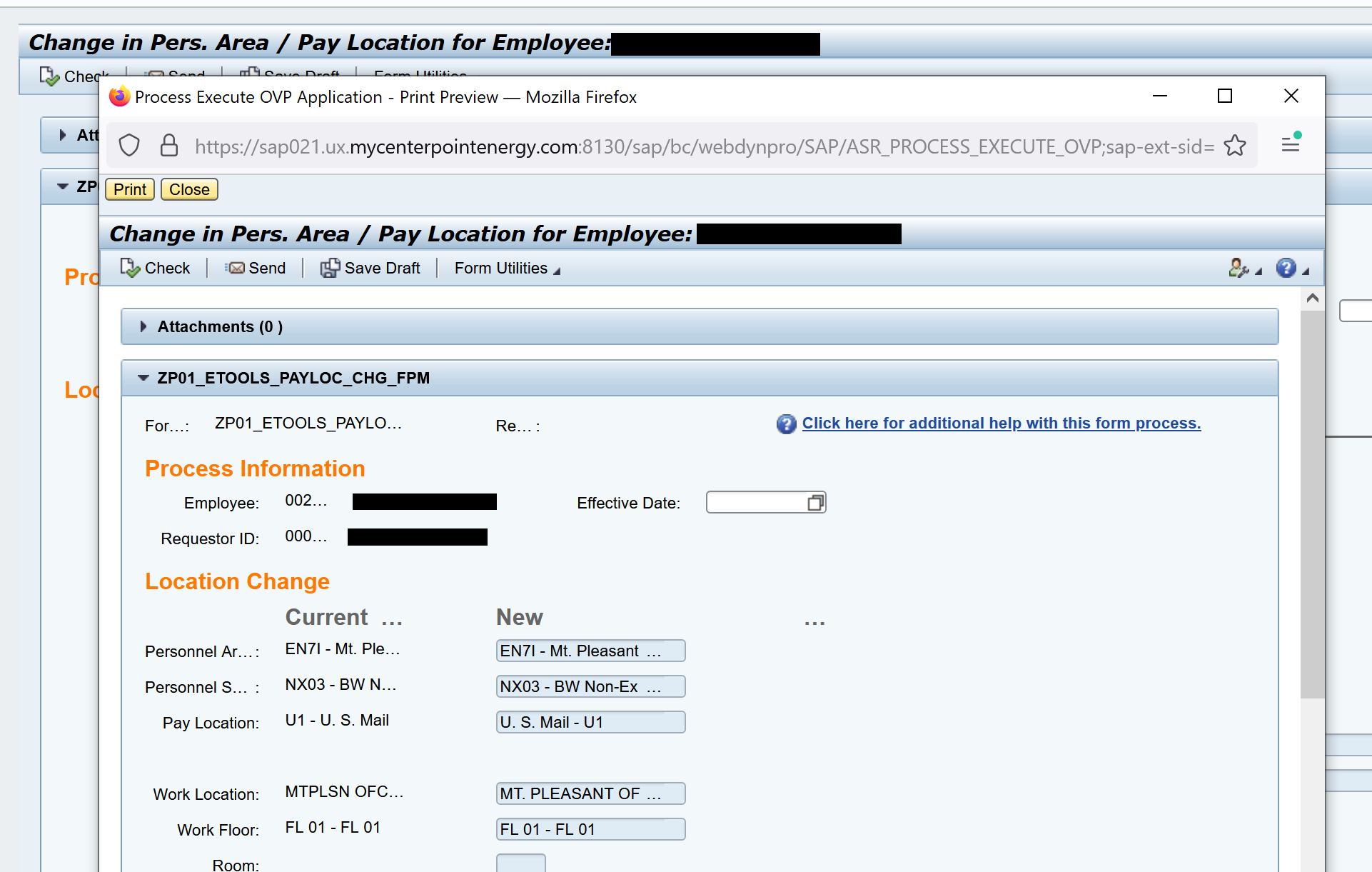 Upon clicking “print”, it will now generate our PDF view of the form as it appears in the application. Magic! 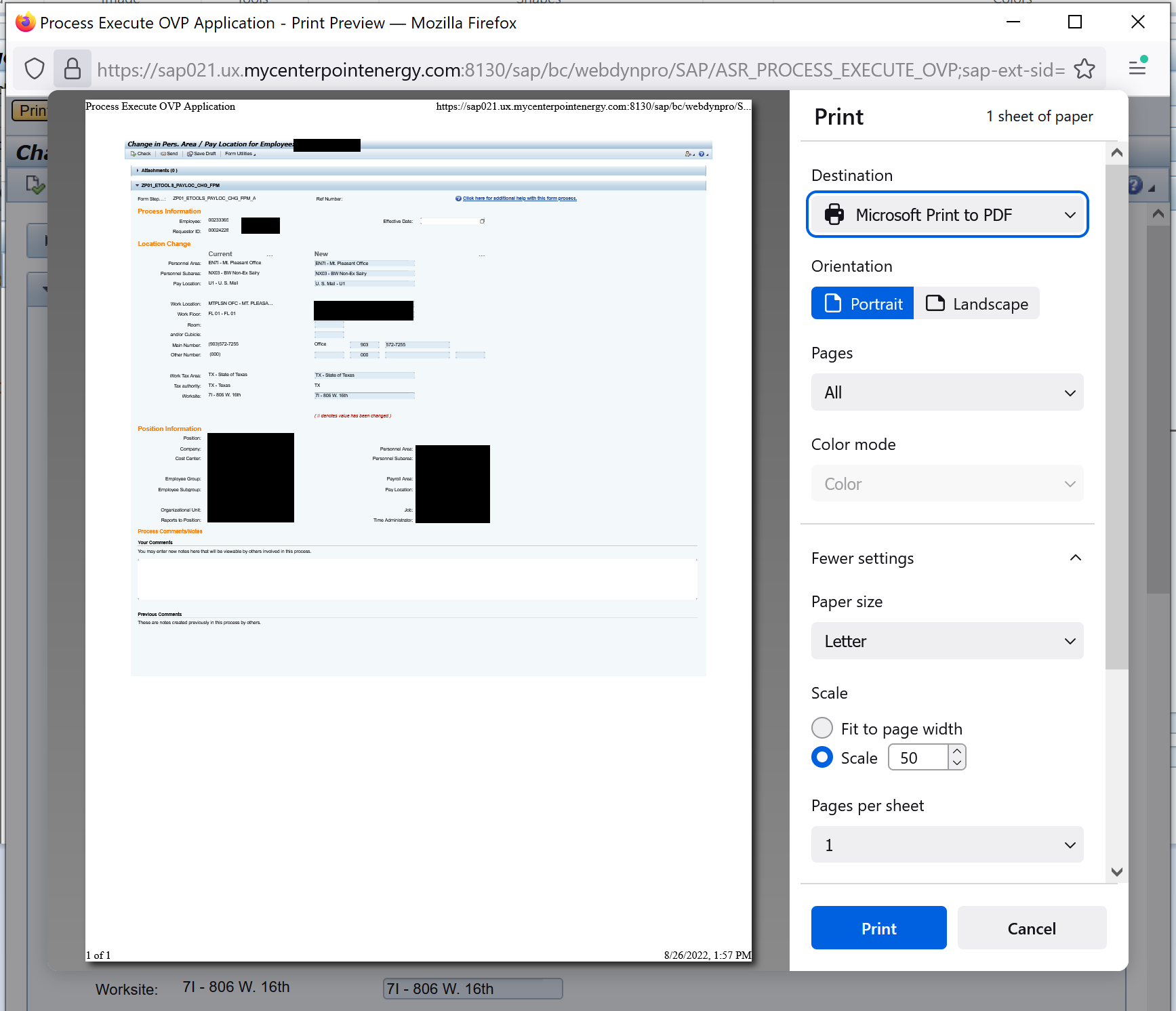 The only other thing to mention here is the user may have to adjust “scale” to get the entire form to save to print/pdf. This is typically the case only for very long forms. Lastly, the “print preview” display of the form will appear active (ie. the user can enter/change info in input boxes and such, however, none of the controls, buttons, etc. will respond to any action other than the “Print” and “Close” buttons at the top.)

Well, that’s about it…actually no…not “about”….that is it. Not much more to it than that….and again, for such a simple “fix”, maybe SAP will take it “in house” to update the standard code. To me, it actually does not matter either way. I am just personally glad to have slayed yet another dragon in the HCM P&F world and move on to the next one after “fighting” this one for many, many years. Maybe I will go rest now……..nahhhhh… who am I kidding! hahaha Till next time….