It has awakened me to the feeling that the WRICEF term is outdated and, even worst, that it could introduce a strong inertia to modernizations and innovations at the time of SAP RISE.

As the blog itself demonstrates, there is a need to create a kind of mapping between types of development objects belonging to different historical eras.

Some story with the James Wood that posted the inspiring blog series Modernizing SAP: From RICEFW to BEANS — Part 1-6 (scroll down in the blog list of the author) describing his BEANS framework to better approach the topic. I like it !

Partha Goswami and James Wood did a great job but I believe it is intrinsically wrong trying to map  map as WRICEF several of the most promising SAP BTP services like RPA, Conversational AI, Intelligent Document Processing (IDP), SAP Work Zone digital workplace as well as SAP LaunchPad, Low-code/No-code web and mobile Apps that we can be created via SAP AppGyver or SAP Business Application Studio only to mention some. These are too far from the ABAP workbench taxonomy.

I see some pitfalls if during the RfP process or the Explore project phase WRICEF term is strictly adopt, and you?

In this blog post I am going to share first some background information and then the result of my analysis to the latest version of the SAP ACTIVATE methodology. We will see in detail if and how SAP ACTIVATE for SAP S/4HANA in RISE still positions the WRICEF term.

Important, we will review the crucial concept of the 5 golden roles. They are specifically assigned to the right project activities to help addressing innovations in alignment with the SAP strategy (e.g. keep core clean, low-code/no-code).

To strike while the iron is hot, sympathetically, I would like to launch the #no-wricef campaign to help innovation take-off. The nice is that we do not even need a replacement acronym indeed, IMHO, the acronym WRICEF could be definitively dropped in favor of a modern and harmonized requirement list for business gaps supporting a detailed harmonized taxonomy in the specific repository (e.g. spreadsheet columns).

We will accurately classify the target development option that will include:

Collecting GAPS (business requirements not covered by the standard) in the WRICEF list is a practice incredibly ingrained in the SAP ecosystem (here the definition from SAPopenings What is RICEFW in SAP Terminology? and in SAPTutorials Quick Tips To Mastering RICEFW In 2022  ).

If I remember well WRICEF list was introduced by the ASAP methodology and it perfectly mapped the capabilities of the dear old ABAP Workbench (R4.7).

The topic had a deep discussion already around 10 years ago in the blog Don’t hold your SAP Custom Development to ransom by Matt Harding. We can see very interesting comments by valuable community superstars like John Moy, DJ Adams, Jocelyn Dart and many others.

All of us, found a way to map new architectural opportunities to the old acronym.

Ten years later, I would like to re-open the discussion analyzing the impact of SAP RISE for S/4HANA and the included SAP BTP credits.

As per the blog post from PARTHA GOSWAMI, we are trying to extend the initial meaning to include some of the cloud native modern services offered by SAP BTP:

IMHO, it is too much, and it is time to move on!

Let’s also remember that WRICEF is an SAP specific term and that no other solution on the market needed an acronym to describe in advance the taxonomy of the development backlog.

WRICEF was created for the ABAP workbench and misinterpretations can lead to:

With focus on Custom Developments, I want now to share what I found about the topic in the fantastic latest version of the SAP ACTIVATE methodology and specifically in the SAP Activate Methodology for RISE with SAP S/4HANA Cloud, private edition.

First of all, let me congratulate the SAP ACTIVATE team for this valuable version that IMO is very well done and mostly coherent with the latest versions, options and solutions.

Searching for WRICEF in the roadmap viewer we (unfortunately) get 11 references. 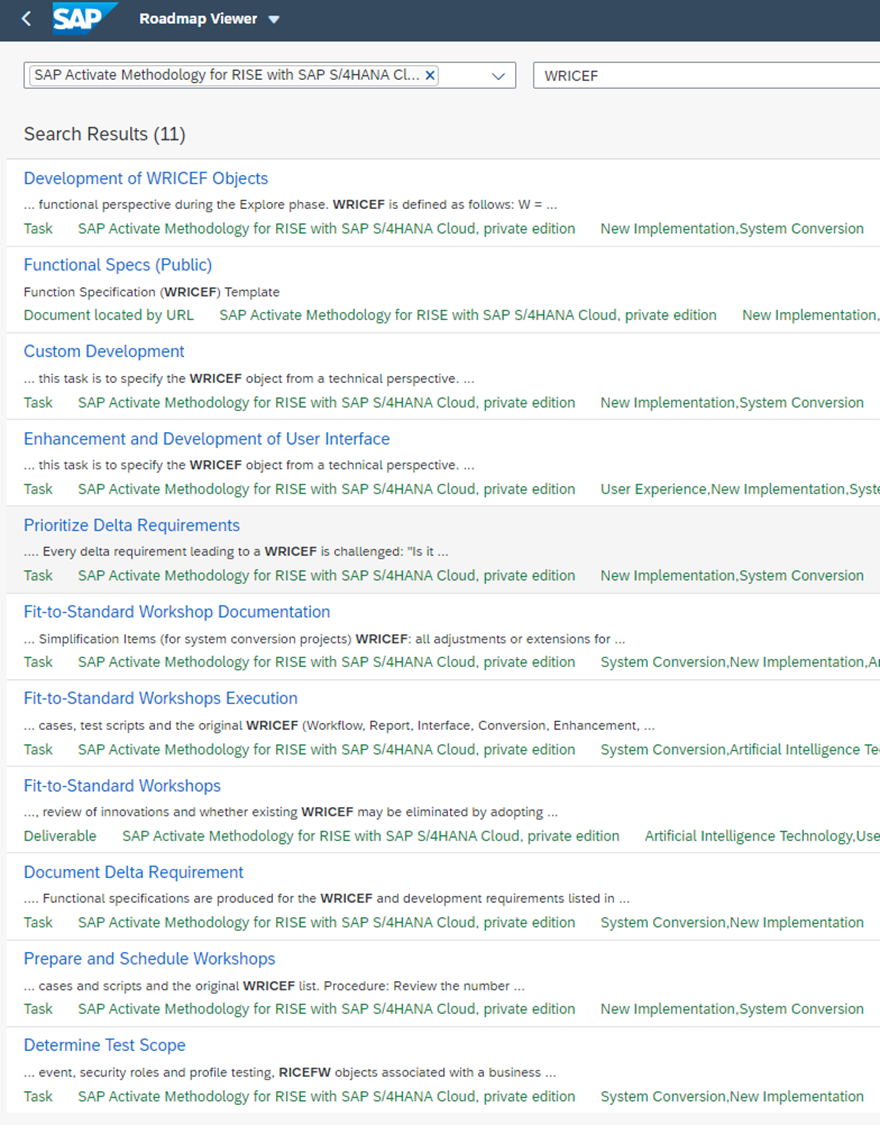 For example, in the Realize / Product Enhancements we have the following page Development of WRICEF Objects 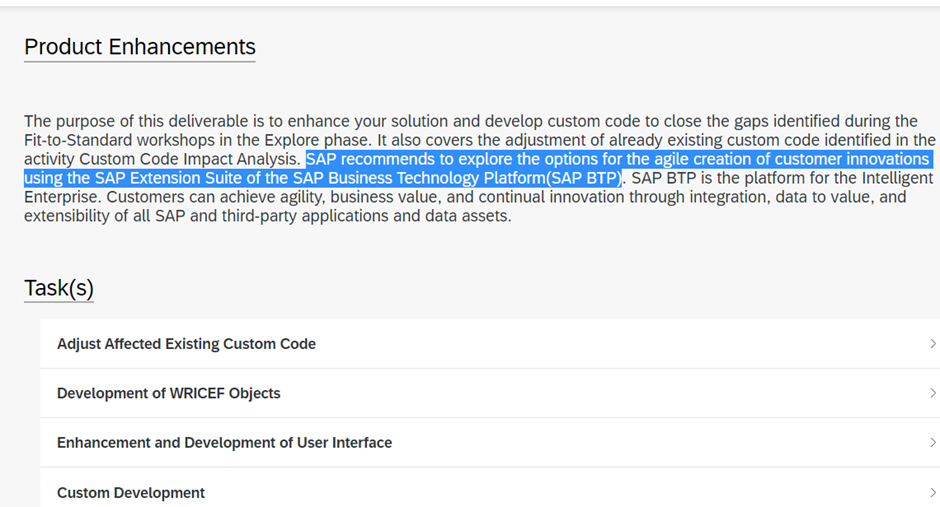 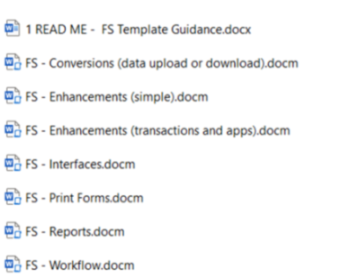 That as from the READ ME file are sticked to the ABAP Workbench ;-(

As last example, I include here one from the WBS Explore/Fit-to-Standard Workshop Validation/ ;-(

Accelerator S4H_552 How to Approach Fit-to-Standard Analysis and Design – Cloud.pptx introduces the Golden Rules where the fourth is “Ensure use of modern Extensibility technologies”. 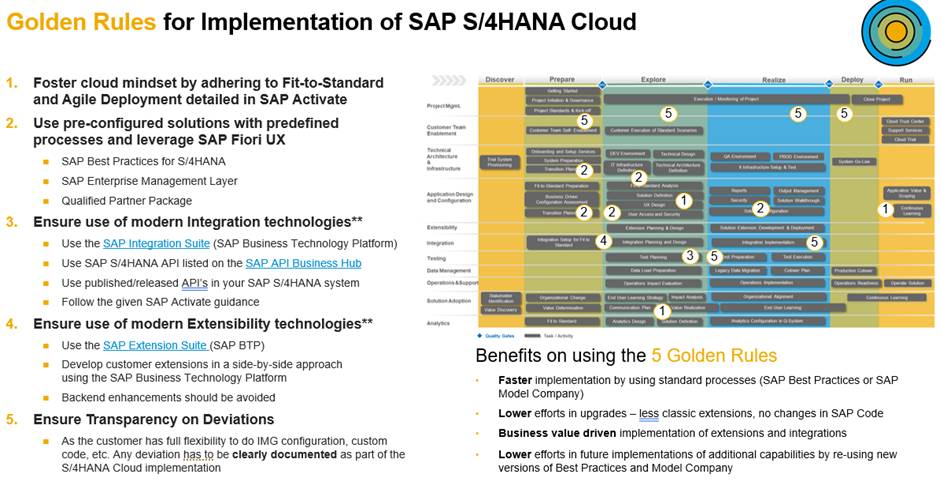 IMHO one of the most relevant accelerator, is the Guidance on Extensibility for SAP S/4HANA Cloud, extended edition (Public) that cover the full range of options:

All the types of In-App extensions are well mapped in the accelerator S4H_951 Enhancements using in-app extensions feature map.xlsx.

I did not found something related Conversational AI, Process Automation, AppGyver, SAP BAS.

Finger pointing to what I consider critical.

Accelerator S4H_552 How to Approach Fit-to-Standard Analysis and Design – Cloud.pptx still refers to the WRICEF List 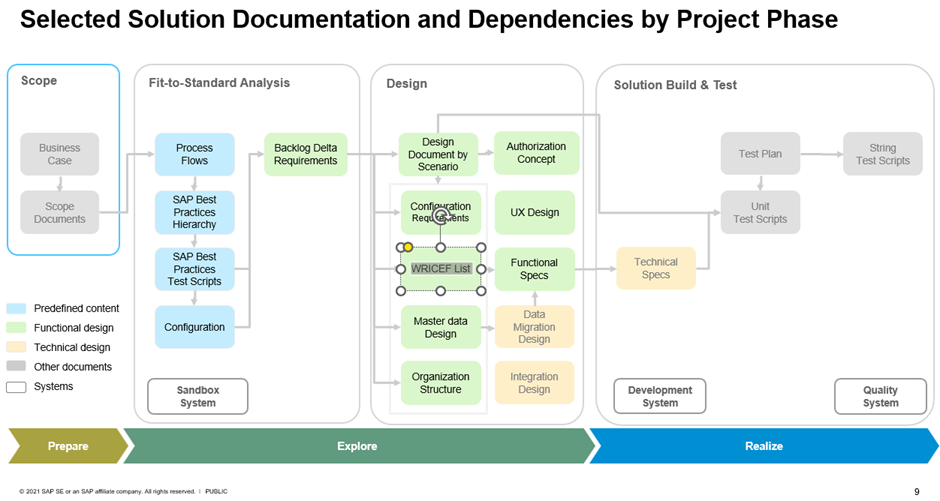 On slide 10 we have the link to the ancient file WRICEF Inventory Template .

Obviously I have developed my personal approach with templates and taxonomy to seamlessly manage In-App, side-by-side and S/4 classical extensions. Everyone can do it but, one day, I would be happy to see SAP ACTIVATE dropping the term WRICEF and addressing all the kind of integrations, extensions, developments and automations in a modern and harmonized way.

In the community spirit, it would be great to get some feedback from you and, in case, sustain the  the #no-wricef campaign using the hashtag in your favorite platform.