Synthetic User Monitoring is a newest app in SAP Cloud ALM. In this app you are informed about availability and performance issues of your web applications before end users are getting affected by it. It does so, by executing on a regular schedule custom Selenium IDE scripts.

By the way: SUM is not meant for application testing or for task automation. For this, there are other nice capabilities planned or already available.

Selenium is an open-source framework for testing web applications. It consists of Selenium IDE (tool that is used to create Selenium scripts) and Web-browser-specific Selenium WebDriver (component that executes the Selenium scripts) with Selenium Grid (smart proxy server to provide easy way to run tests in parallel on multiple machines).

It provides us with Proactive detection which enables us to detect issues early and even before the end-users encounter problems. Synthetic User Monitoring also provides us with Factual Metrics. SUM re-executes same scenarios, and it allows us to monitor the evolution of the performance and availability based on metrics collected.

Let’s have a look into the SUM main features:

So what do we need to do now to get started with Synthetic User Monitoring? 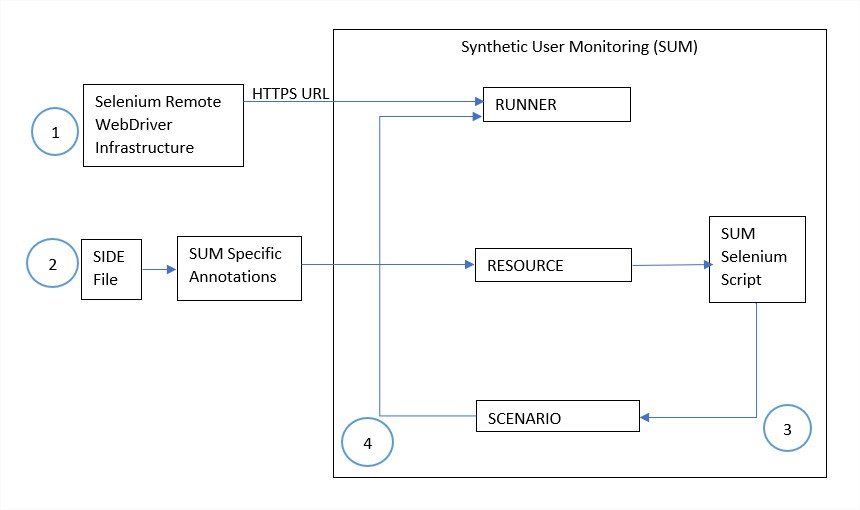 To setup Synthetic User Monitoring you only have 2 prerequisites:

Configuration of Synthetic User Monitoring is performed in the application itself.

Setup and Configuration is done in 4 different steps:

Currently are only managed runners supported which means that the scenario execution is scheduled and triggered by the SUM backend.

Upload the Selenium SIDE files that contains your scripts. After import it becomes a new Resource entry in the SUM configuration. During this process, file content is analyzed, and test becomes a SUM Selenium script.

If the updated file gets re-uploaded in Synthetic User Monitoring, it is updated.

It means you create a scenario for your SUM scripts. Keep in mind that one runner can run several scenarios, but each scenario can only be assigned to one runner.

Following good practice during SUM scenario creation it will also be necessary to appropriately set secured variables via the SUM configuration in the parameters section of the Scenario details.

In the end of step 3, SUM allows you to adjust some Selenium Execution Parameters. The following properties are adjustable:

This means we activate the scenario on a runner.

And now as promised, I’ll show you SUM in action. Our scenario looks like this: We want to monitor if our Focused Build Requirements Management is available on the one hand, but performant on the other hand. To push it a bit further, we also want to check if a very special requirement (status: “Approved” and label “SUM is great!”) appears in the list. Currently the requirement is in status “To be Approved” and our runner gives us an error. So we correct our Requirement and we set it to “Approved”.

Then we go to the SUM app in SAP Cloud ALM and wait for the runner to execute the script again:

As a summary, here again a drill-down in the SUM App into our scenario.

SAP of course has some more features planned for SUM – so stay tuned.

I look forward to your feedback.