The aim of this blog is to give an easy way to setup an SFTP connection between a SAP system and an SFTP server.

This subject has also been covered by many blogs. Although these various blogs are good, what is proposed here is a way to do it without any constraints. The great blogs : https://blogs.sap.com/2013/10/03/write-file-on-sftp-server-from-sap/ already describe the solution of this present blog, only it does not give a step by step solution.

As Said, SAP does not cover SFTP using SAPFTP. According to note 795131, the best solution is to use a third party software to do it and then call the third party software from SAP (using SM49/69 host command). Still, if the SAP system is running on a Unix Based system, everything is fine, because the syntax offered by Unix allow you to run SFTP command in Oneliner (using | eventually), but if the SAP system is running on a Windows NT based system, problems arise.

The native SFTP command cannot be used as a OneLiner. The impact of this is that you have to find a way to build a script able to connect to SFTP and then do action inside the SFTP native app.

As describe in the blogs quoted before, one solution will be to use the free-to-use Winscp app. Winscp allow you to connect and to action on a remote SFTP within one line of command.

Assuming that Winscp is installed in a “classic” sort of way, here is the command that will allow the system to summon Winscp : 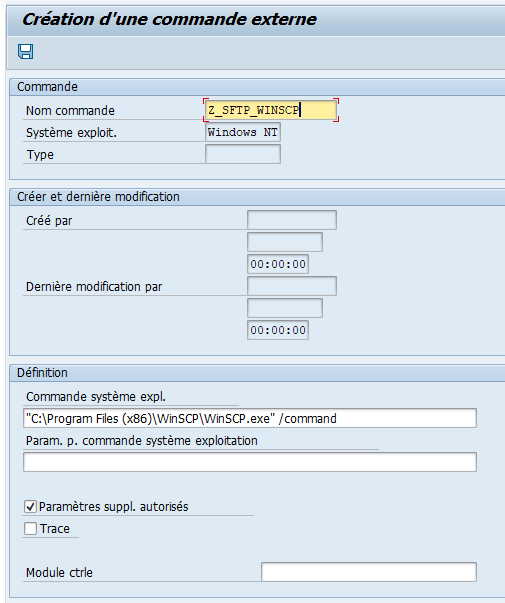 SM69 for the creation of System Command (Screenshot from own system)

As described before, the goal is to have a Oneliner. It requests us to put all the arguments in the same time and in the correct order. Below a command example, we’ll detail it later on :

The first part is already known and will be taken into accound by our SM69.

After that, comes the “open” :

It speaks for itself, but to make it work : <user> must be a user with the access rights on the <host>, the password can be gived here. As the communication is done through SSH, we’ll consider it safe.

The remote folder is the SFTP path on which the file must be dropped. (Of course the “<” and “>” are not to be keeped in the final line.) On this step, it is also possible to connect to the root of the SFTP server and the give the location with the next command parameter : “put”.

The first part is the file that is to be transfered and the second the name of file on the SFTP after transfer. It can be replace by “./”, to give the remote file the name of the file in the first paremeter.

Finally, we give a nice “exit” to cut the connection.

With all that, here is a list of command that are suggested to include as well :

The two first options comes at the beginning :

The last one is to put at the end of the command and allows you to have a log of each connection. Feel free to name it with time and date so it wont be increased each time, or clear it regularly.

At this point, the command can be successful only if the public key of the SFTP server is known by our system (Windows). To make this public key known, simply connect to the SFTP using the Visual Interface of Winscp (it will create the correct entry in the Registry) :

Now, let say the public key is subject to changes or it is impossible to access Winscp visual interface. We still have a card up our sleeve, but its a possibility that is definitely not good for the security :

Meaning any hostkey will be accepted. Another possibility is to give the real hostkey surrunded by quotes and not a “*”.

We can use the table “exec_protocol” and we can analyse it with few keywords, but unfortunately Winscp does not give so much information outside of the log.

A way to achieve the analysis of error is maybe to read the log file.

In anycase, if the connection fail, the “exec_protocol” will be filled, here is a sample abap code that check some keywords in it :

Winthin a Windows environnement it’s quite difficult to achieve SFTP exchange from SAP. Luckily some freeware, as such as WinSCP, are good enough to give us workaround for this situation.

We cannot be sure whether or not, FTP and SFTP will still be present in the near future but, many actual installation use FTP and will certainly migrate to another technology for security purpose in the next years. For them SFTP seems like a good choice.

If you have encountered similar situation and have faced it with another solution, please share in comments.

Also, if you have any question regarding the implementation of this solution, please submit your interrogations via comments.

Also check the very good blog : https://blogs.sap.com/2013/10/03/write-file-on-sftp-server-from-sap/ which we already talked about. It contains very useful tips about WinScp and the basics for starting using these technology within SAP.

That’s all for this topic. I hope it’ll help you the next time you face SFTP connection.

Thanks for your time ! If possible, I’ll try to write other blog post on data exchange problematics !