I’ve always enjoyed the NASA API (https://api.nasa.gov/) for projects. Especially the APOD (The Astronomy Picture of the Day.) This API provides a new picture of our awesome universe every single day. The archive goes back to mid-1995 so there are over a decade’s worth of amazing images. That’s well over nine thousand images.

The app I created with AppGyver is called Show Me the Universe! and is available here https://showmetheuniverse.appgyverapp.com/

Using the app, you punch in a date in the YYYY-MM-DD format, push the button and the app will return the photo and a description from the NASA APOD API Feed. It’s like a window into the universe from your PC or mobile device! 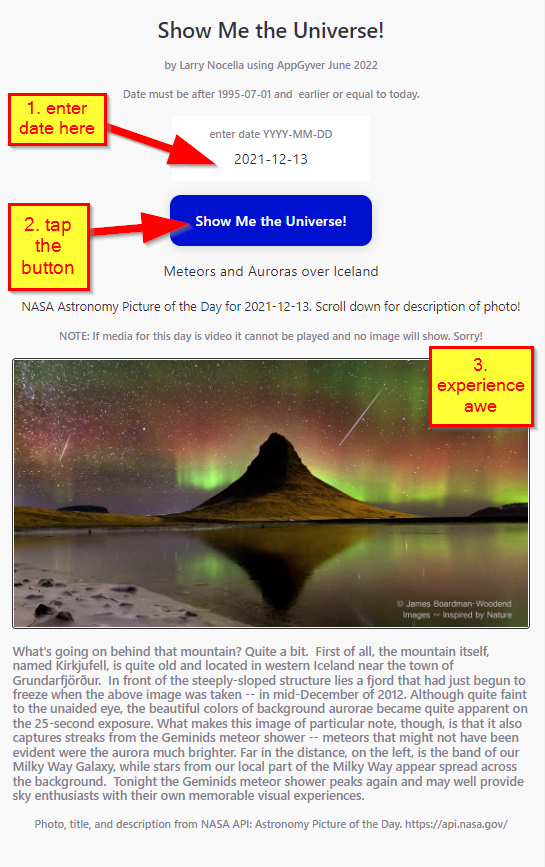 The Reasoning Behind the Idea

I wanted to make an app that could help bring users happiness. One of the emotions closely linked with happiness is “awe.” Here’s a USA Today story about the connection. (Link)

So the goal was, why not have a way to have users activate a feeling of awe in a simple way? And what else creates awe more than looking up at the night sky, or observing other phenomena of our natural world?

And so, Show Me the Universe! was conceived! An easy way to give yourself a dose of awe – and hopefully happiness – right from your device!

I love #nocode and have used a fair amount of tools. I found AppGyver to be excellent, but not perfect. There were some points of difficulty for me in building this app.

DISCLAIMER: I may not know what I am talking about with some of these things. I will simply relay my experience and currently knowledge. Any feedback on something I’m missing would be appreciated! .

AppGyver is sharp – I can definitely see using it more. I think I’ve gotten the hang of the API usage – but with improvements to that and the market place, it’s going to be my favorite going forward. Construct.net is great #nocode tool but focused on games. AppGyver focuses on any kind of app and that is a tool I’ll be adding to my kit.

Thank you! #nocode4eva and stay awesome, my friends!

Show Me the Universe! is available here https://showmetheuniverse.appgyverapp.com/