As a couple of people have asked, this blog will try to explain the scripting thought process used to create the Pac Man Analytic Application.

It’s worth calling this out from the outset:
The idea and scripting more or less evolved as each step presented a new challenge.
I’ll be the first to admit the coding is inelegant, inefficient and without doubt could be dramatically improved.

I won’t cover all of the coding – mainly as
A. I didn’t document it at the time
B. I don’t have time now 🙂

The Application consists of 3 main panels as shown below:

Title and Score are just just used to group text widgets etc, so purely for ease of layout.
pnl_main contains the most of what’s happening in the Application 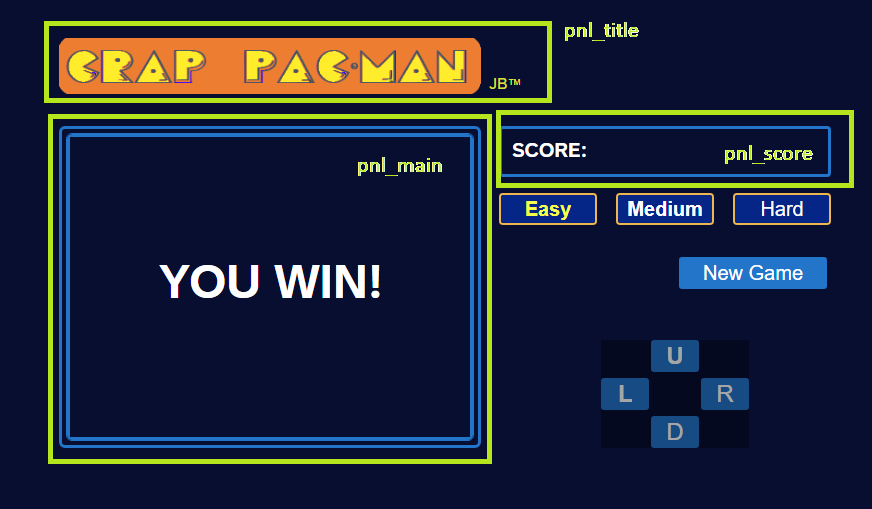 The logic is fairly simple, we have a container panel of known Height & Width, the Pac Man images are stored within a panel and there is a panel for each dot.

A sub loop is also run that shows/hides the Pac Man images of open/closed to give the animated effect.

Global variables are updated in each run of the move loop to store the Right / Left / Top / Bottom position of the Pac Man panel.

As part of this movement loop, we also loop through the array of panels containing the dots and check the Top & Right position of each dot panel.
If any of the values match the Top & Right value of the pacman panel –  set that dot panel to invisible & add one to the score count (a global variable storing a numeric value)

Because we’re using a grid of known size, we also know where the Pac Man panel shouldn’t be allowed to move up/down/left/right.

So the movement is all hardcoded with conditions to stop the Pac Man panel from moving off the course of dots.

Move Down example
e.g. For down movement there are only 3 X position values where it makes sense for Pac Man to             move down

Automated movement of the Ghost Panel

This would win an award for the most inefficient coding

When the GO button is clicked to start the game, a Script Function is called that contains the code below.

The Ghost panel follows a pre-set path following the dots – this movement loops until either Pac Man eats all the dots and wins the game , or the Ghost panel position matches that of the Pac Man panel and it’s game over.

The Timer start delay is determined by the value set when a user clicks one of the 3 game mode buttons (Easy, Medium, Hard)
This start delay affects how fast the Ghost Panel moves.

Other bits and pieces

When the new game button is clicked or the game is won  / lost the following actions happen.

1. Layout
It was important the Pac Man, Dots & Ghost panels were all the same size
and that the movement steps were in blocks of 10 px

This was to ensure that at some point the Top and Right position would match allowing us
to flag when to hide a dot, update the score and trigger the game win/lose code

2. Hardcoded logic
There’s no real intelligence in the movement logic – Pac Man can only move if hardcoded
conditions are met  & the Ghost simply follows a pre-set path on a loop.

3. Lack of Parallel Script running
The game doesn’t truly work – in as much as we can’t run Parallel scripts in SAC
So when you click the Pac Man movement buttons, it temporarily stops the Ghost movement
scripts from running.