As my first blog on the SAP Community, I would like to tell you a little story. A few months ago I joined an AMS project and some of my daily tasks involved a twice-a-day monitoring on some SAP Cloud Integration iFlows and a few SAP S/4HANA applications like Message Monitoring, Manage Output Items, etc.

In the beginning I took my time in analyzing the payloads and error sources because there were many scenarios and I could not evaluate them as fast as I can now, but because I got better at doing my job I ran into the need of fetching all the messages with their details in a more efficient way.

On the other side, the messages proccesed in SAP S/4HANA were a bit more variate and it took much longer to gather all the error texts, timestamps, message IDs, etc.

To be more precise, I had to monitor the following apps :

Adding the time spent on all of these applications resulted to 30 to 60 minutes per monitoring, and I had to do this twice a day.

This need fueled my creativity and I started to draw a plan on how I could do my monitoring task faster and smarter.

The discovery that generated an idea

I went on the SAP Help Portal on the OData API page  and I also did a research on SAP API Business HUB hoping I will find any API that I can use in order to get everything i need, but I didn’t find anything related to a dedicated API for monitoring/exposing the messages.

I asked some of my experienced colleagues for any advices regarding this exhausting part of the monitoring, but they did not have that many ideas, because we are all experienced in Cloud Integration, not SAP S/4HANA.

One day, a colleague gave me a tip to go in an app and go to Inspect > Network to check the calls that are being made in the background when I hit the ‘Go’ button in order to display the messages processed in the specified datetime period.

There, I saw that everytime i hit Go, a GET call is being made and then all the data was displayed.

Also, by clicking the Payload Tab, I was able to see the whole query, with the odata entity and the query parameters. 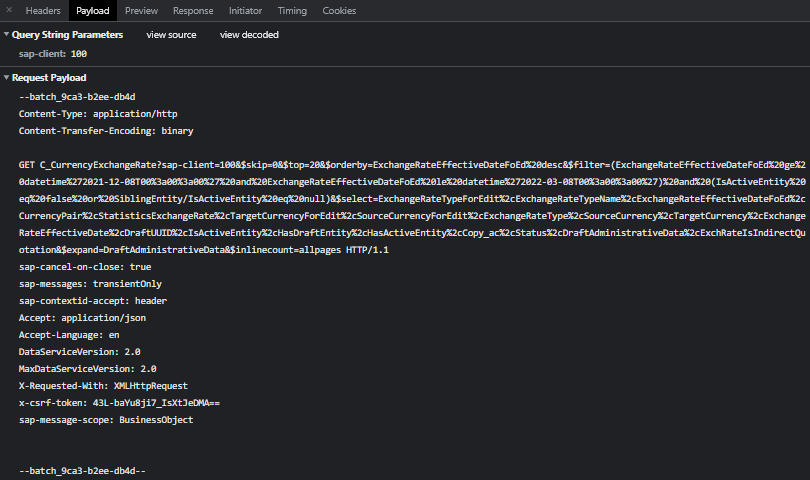 Doing the same GET request via browser

This discovery made me think if I could do the same calls from SAP Cloud Integration and process the payload in a certain way that in the end, I could have the following data from each app :

With this idea in my mind, I started creating a SAP Cloud Integration iFlow that will automate this task and process the messages fetched from SAP S/4HANA.

In this chapter I will talk about the general structure of the iFlow, as I did ‘split’ it into a main process and 3 types of local processes : 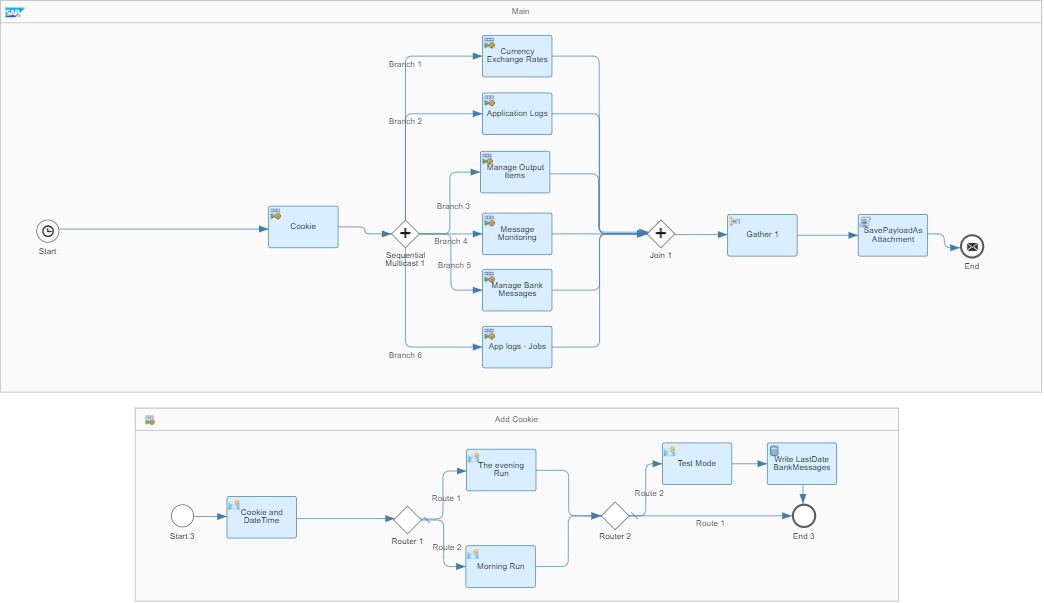 The main part of the flow uses a Sequential Multicast in order to go through all the local processes assigned for each application mapping, a process call and a groovy script ( https://help.sap.com/viewer/368c481cd6954bdfa5d0435479fd4eaf/Cloud/en-US/03b32eb2c5c249f0a59bcd27c44d1e4e.html ) that saves the final payload as an attachment.

The ‘Add Cookie’ Local Integration Process is used to set some date/time parameters for later use and the session cookie.

I found out that without the session cookie generated when I log into SAP S/4HANA I could not establish connection between SAP Cloud Integration and SAP S/4HANA. This part is still in development, I still haven’t figured out a way to generate or fetch that cookie from SAP Cloud Integration, right now I manually add it into the iFlow everytime I configure/deploy it.

The router non-XML condition is comparing the datenow expression with a constant value datenow 11:30 AM, so basically if the datenow parameter generated is bigger than 11:30 AM, it will go in the evening run.

The second router is used in Test mode, so I can Configure the iFlow and use any datetime interval I choose. 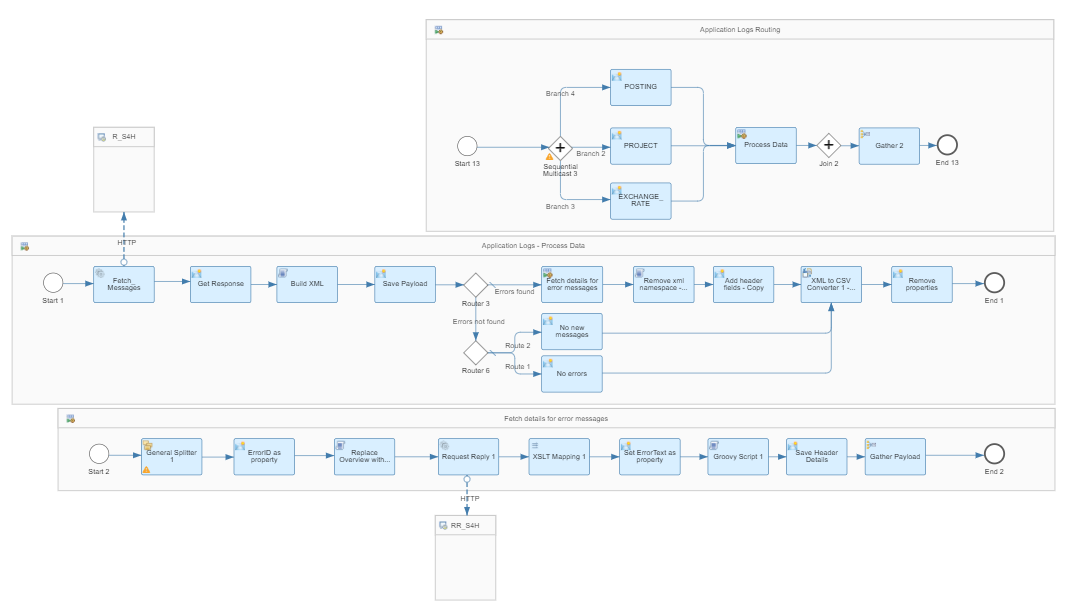 I used 3 local processes in order to fetch/process the messages for this application, and here is the logic :

{{system-url }} – the link to the desired SAP S/4HANA system

{{toptotal}} – desired number of max. items returned, I set mine to 300 because we don t have more than 100 daily messages per app.

${property.SubObject} – the object set in the Routing Local Integration Process

${header.PreviousDate}, ${header.Nextdate} – dates from the main flow that set the query interval.

In the Header Node I store the last message timestamp and the total number of messages, and for each item from the response that satisfies the condition Severity = ‘E’ ( error ), create a ErrorItem node with its specific fields.

For no errors found [ route condition :  //Messages/Header/Total_Messages >= ‘0’and not(//Messages/ErrorItem/ItemID/node()) ] but with any successful message found send only the saved payload in step 4)

Sample scenario with at least one error message found

Let’s take the following scenario with 21 total messages, of which 2 are in error status :

This payload goes in the ‘Fetch details for error messages’ Local Integration Process and gets processed with the following steps :

Here is the Response Body : Because this app is a bit different than the other ones and does not provide a datetime filtering of the type ‘ from the Lastdatetime until NextDateTime’ and only based on LastDate OR LastTime.

I had to store the last processed timestamp in a global variable, read it before the start of the Process Error process, filter the fetched messages so it processes everything after the stored timestamp and write it back at the end.

The 2 routers are placed to avoid reading/writing the variables and instead use the value sent in the externalized parameter used by Test Mode.

This type is basically identical to the first type, except it lacks the ‘routing’ part, since it’s not necessary to do multiple calls based on the message type.

This type is the simplest of them, uses the same logic and only requires a comparison between the total number of exchange rates updated the day before the current date.

While the route 3 [//Messages/Header/Total_Messages = ‘0’] sends a message saying an error has occurred or no updates were made since the last run ( for the evening monitoring ).

The end of the iFlow

All of the local processes payloads are being gathered and concatenated as plain text, and in the end we have a message containing all the message details under csv format.

I chose CSV format because in the end I have to add all of these informations in an excel and send it to my project managers.

It may not be the prettiest iFlow you have seen, but it does reduce my exhausting task to a matter of minutes, and its all that matters in the end.

There is still some work left to be done on how to get that session cookie in SAP Cloud Integration. I got already some suggestions on that, by fetching the X-CSRF-Token, checking the set-cookie/cookie response header and use that instead, but I did not manage to make it work until now.

I also got a suggestion on making it run based on a HTTP Call, so I can use the iFlow URL and run it via my browser, so I don’t have to go in SAP Cloud Integration everytime and deploy it.

I hope you liked my article and feel free to reply with  any suggestions here on in the SAP S/4HANA Questions Section as I am still updating the flow.