with the latest release of SAP S/4HANA Cloud for advanced financial closing on February 27, 2022, the Define Closing Tasks app was replaced by the brand new Manage Closing Task Lists app, which comes with many great new features and enhancements to support your team with an efficient setup and maintenance of closing task lists.

The closing process usually requires a large number of tasks to be executed in a well-defined order and they have to be orchestrated across multiple communication systems and a large number of entities. The purpose of advanced financial closing is to support our customers in mastering this complexity so that they can run a well-orchestrated and efficient financial close.

The task list template therefore serves as a blueprint for the closing process in general and is taken as a basis for each task list of a specific closing cycle. With the new Manage Closing Task Lists app, we have massively enhanced the maintenance efficiency allowing for a smooth initial setup as well as an easy ongoing maintenance of closing templates. We have also focused on an improved flexibility of closing templates and task lists so that for instance process improvements and organizational changes can be reflected more easily than before.

In this blog post, I will highlight the most important enhancements that come with the Manage Closing Task Lists app and that allow your team to achieve an even more efficient setup and lifecycle management of closing task lists. This update also applies to your existing task list templates, created in the old Define Closing Tasks app, which are taken over and can be used seamlessly in the new app.

In the previous app, only one single communication system could be associated with a task list template. It had to be defined on the template header.

You can now add multiple communication systems into one task list template, allowing you to orchestrate your financial close across all distributed systems within one template. No need to split up your closing tasks into different templates along the lines of your connected systems anymore. This is especially helpful for customers using advanced financial closing alongside SAP S/4HANA for central finance. They can now connect all of their source and central finance ERP instances, model the according closing tasks within one central template and therefore automate chains of closing tasks to run fully autonomously in the background. Tasks consider their dependencies across system boundaries. For example, a customer running central asset accounting can automate the settlement of assets under construction in all of the source systems and then the depreciation run starts automatically in central finance – fully orchestrated by advanced financial closing. 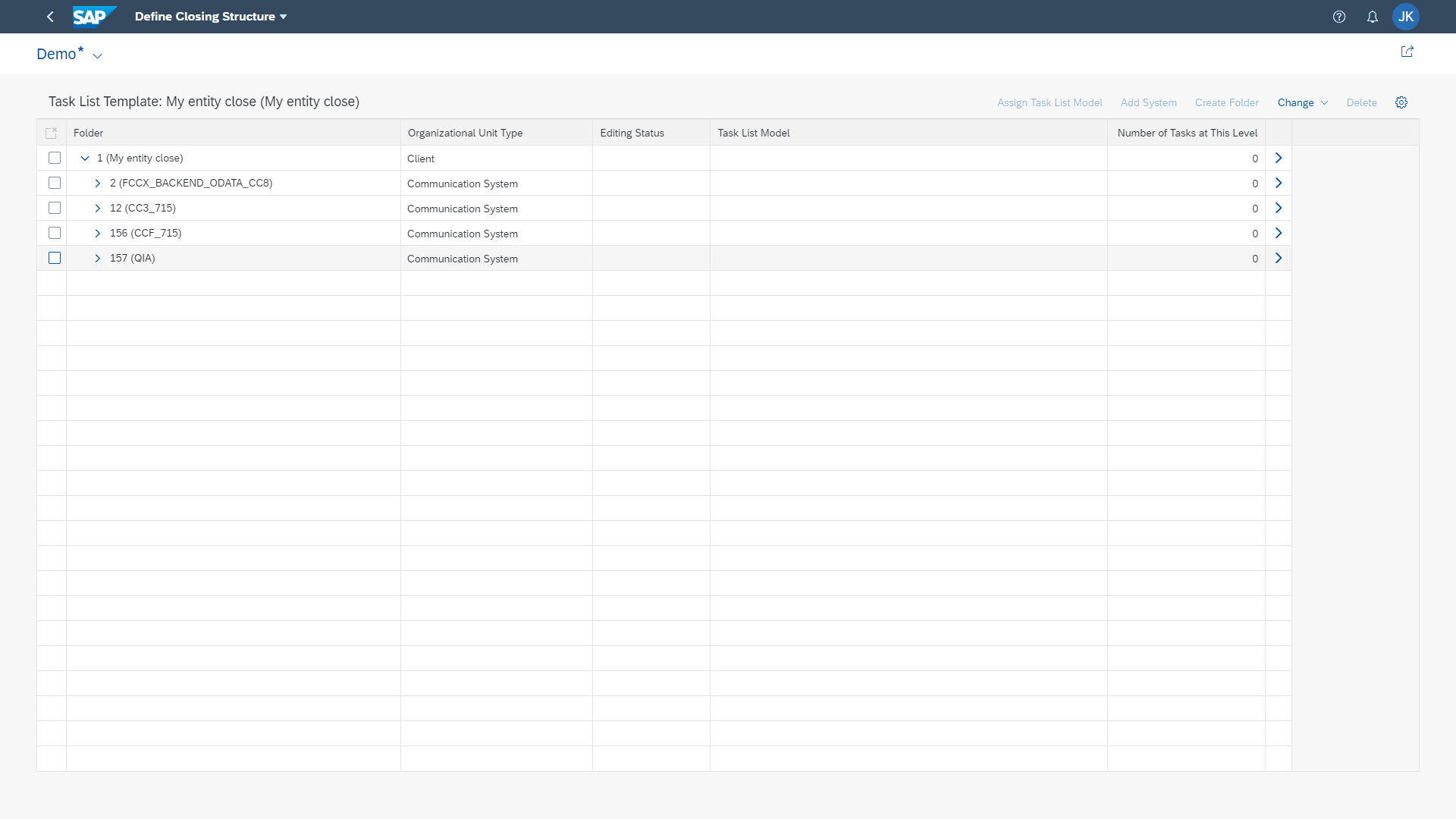 Only one user could edit the complete task list template at a time. Any small change required the user to lock the template on header level, thereby also locking all folders and tasks below.

Editing in the new Manage Closing Task Lists app is possible on folder level instead of on header level. This allows multiple users to work on different folders of the same template simultaneously. Editing a folder only locks the folder itself and the tasks directly below. The editing status column in the closing structure provides transparency as to which folders are currently being edited and by whom. 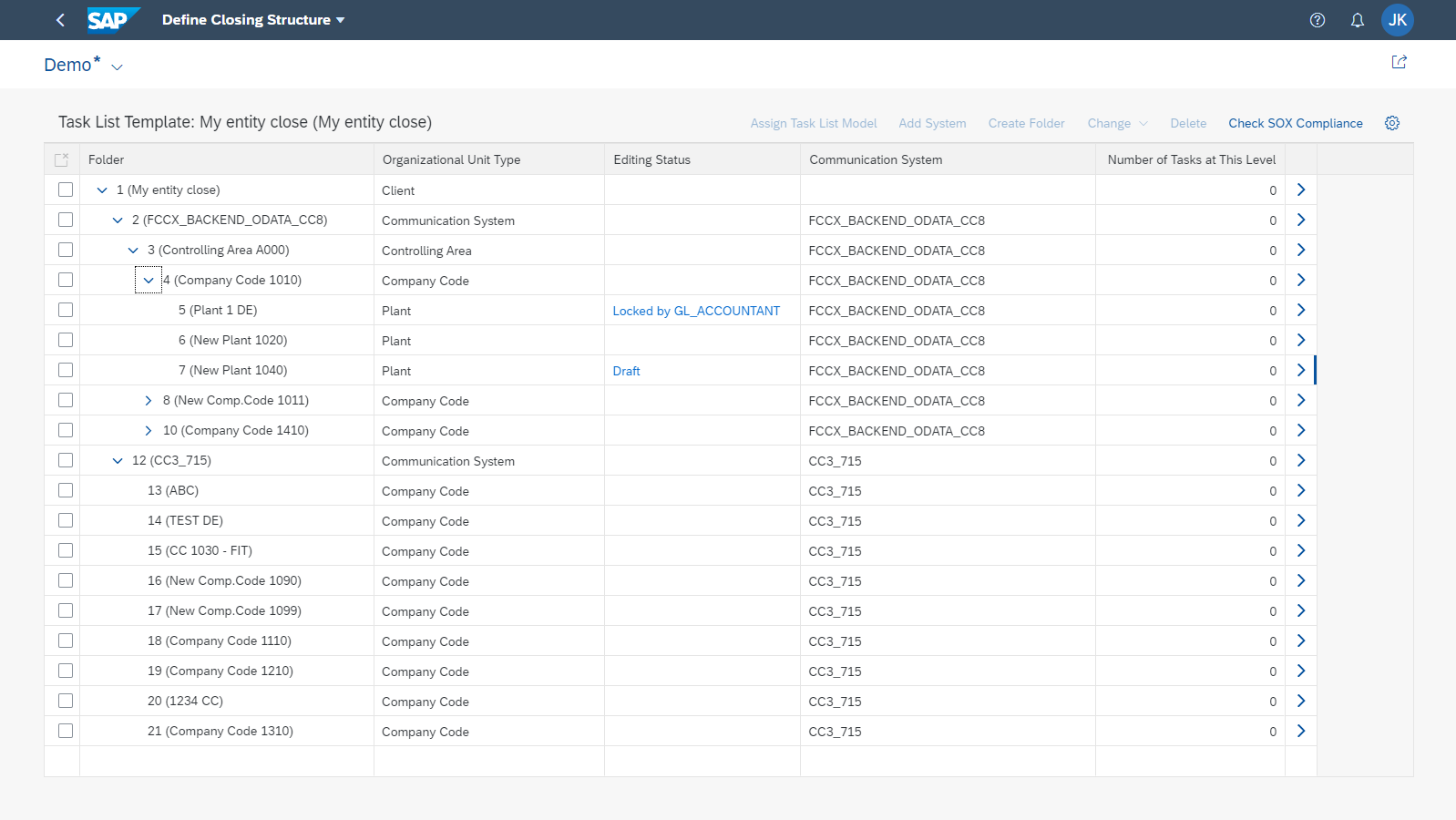 Closing hierarchy including the editing status of folders

All organizational units, represented by folders in the closing hierarchy, were added automatically according to the chosen hierarchy type.

You can decide which organizational units shall initially be represented in the hierarchy. When adding a communication system folder, a guided procedure leads you through the steps to select the organizational units of the respective system that will be created as folders. This allows you to efficiently set up the initial hierarchy based on the scope you require, and you can add on to that as you go live with further company codes in a rollout approach during the implementation of advanced financial closing. The hierarchy type in the guided procedure remains, but just to support you in selecting the required organizational units, it’s not a fixed attribute of the template, and the hierarchy remains fully flexible later on. 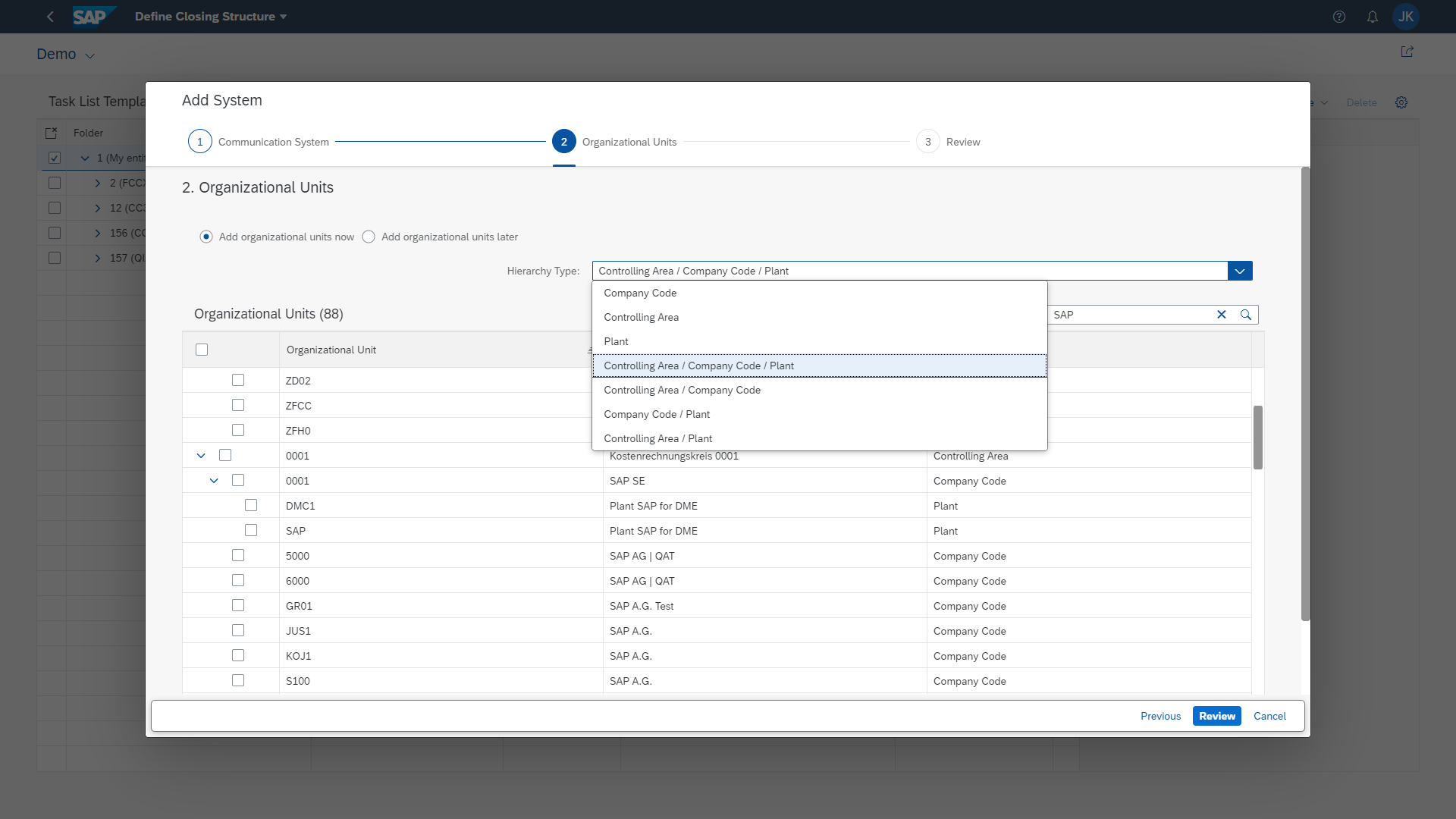 A task list template had to adhere to a specific hierarchy type, for example the type “Company Code”.

There are no prescribed hierarchy types anymore. This allows for a higher degree of flexibility:

This allows you to represent the organizational hierarchy exactly in the way you need it, be it a flat company code hierarchy on one branch or a multi-level hierarchy including a controlling area and plants on another branch. 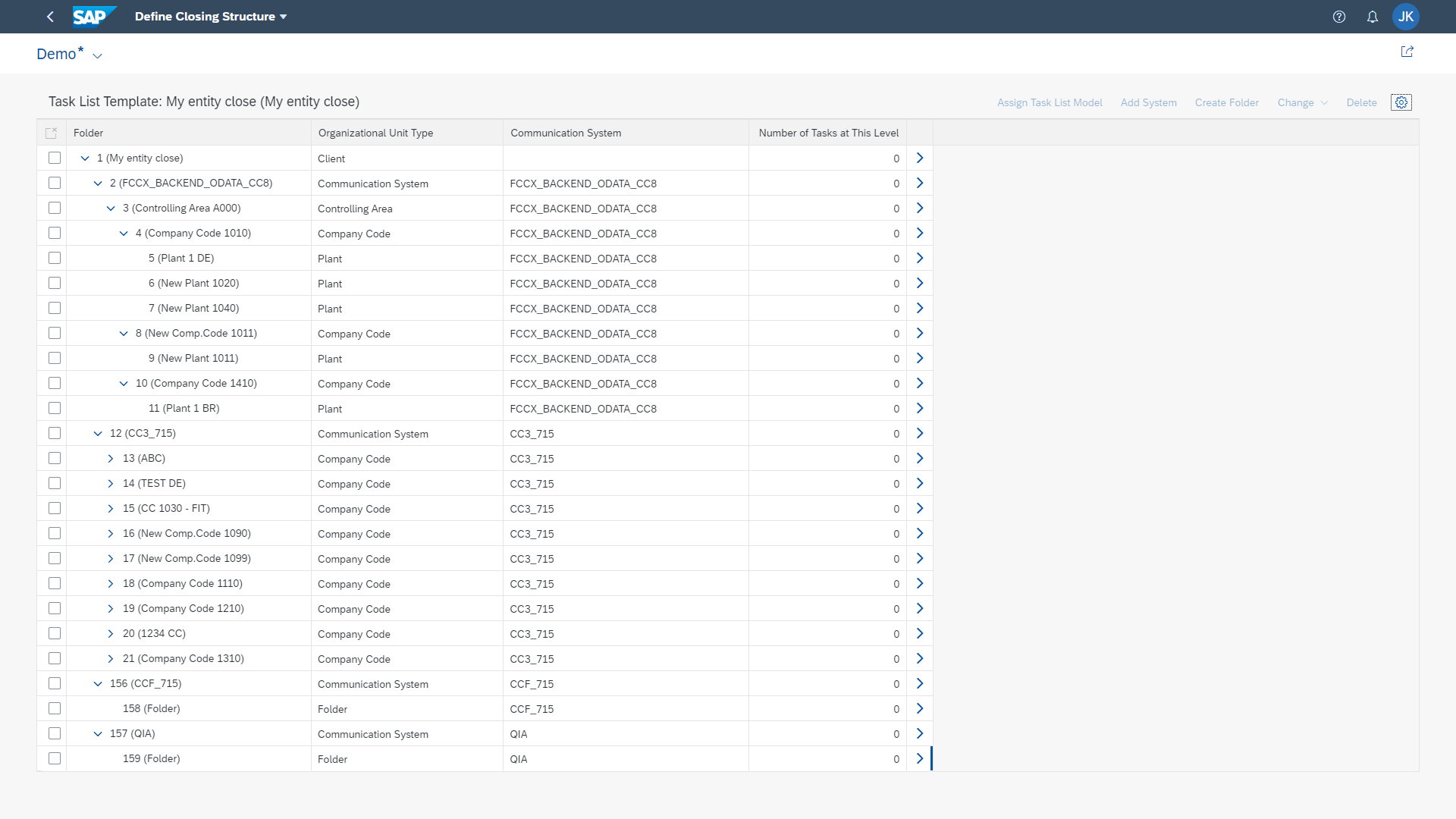 Task list models had to be assigned on template header level and could thus be applied only to the entire organizational structure within that template.

This is my personal highlight and I see this specific feature as a large value driver for our customers. Task list models of type “Company Code” or “Without Hierarchy” can now be handled flexibly:

This feature enhancement provides you with a high degree of freedom in the setup of your task list templates. The flexible assignment options allow for a more modular approach to setting up task list models in the connected communication systems. This makes it possible to assign only exactly the required tasks below each company code by means of modular task list models. Therefore, this feature is really a booster for maintenance efficiency and lifecycle flexibility for your closing tasks. 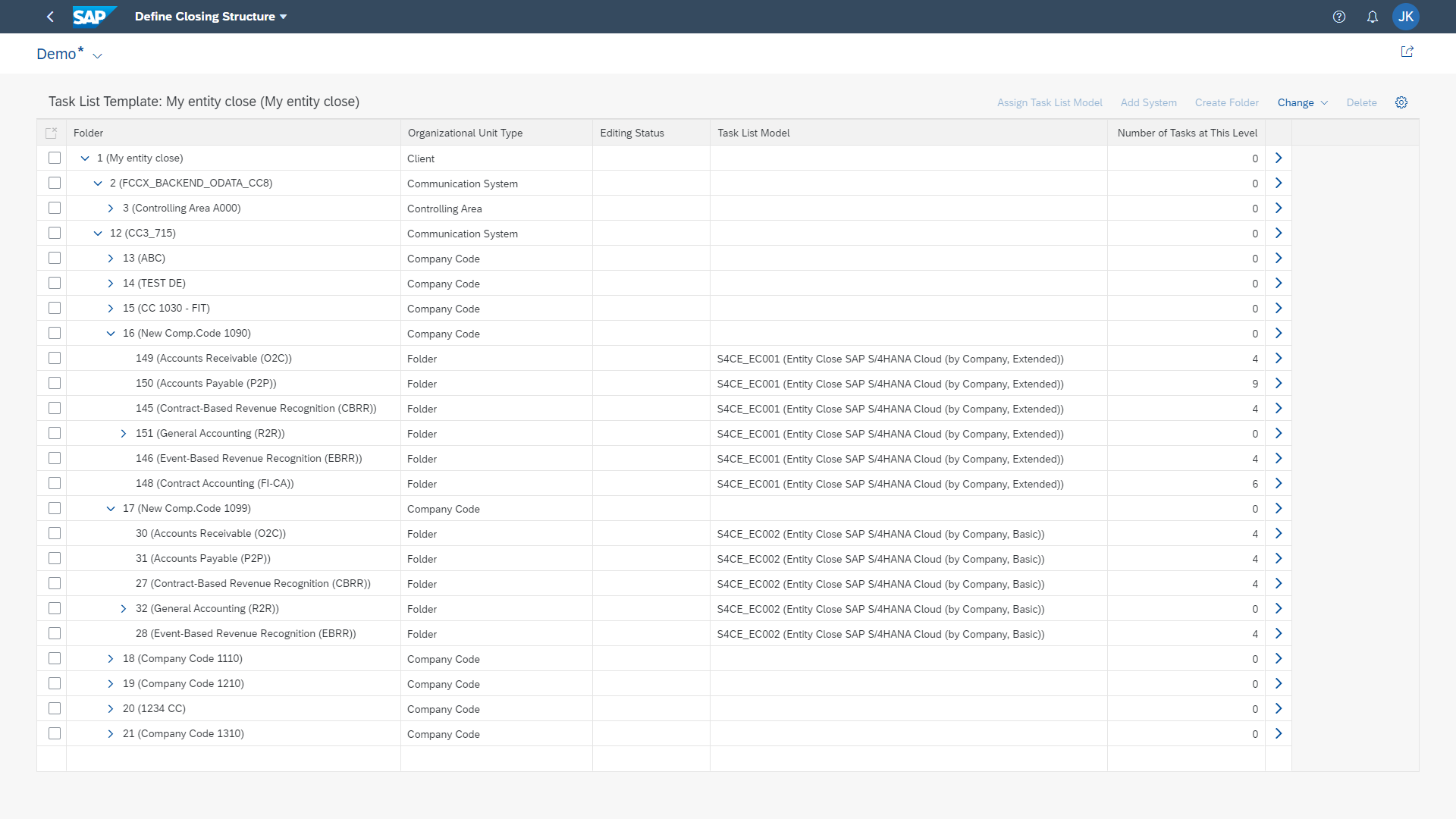 You’ve now seen the highlights of the recent release of SAP S/4HANA Cloud for advanced financial closing. For a full list of all enhancements, please check the Extended What’s New on the SAP Help Portal. For a more detailed walkthrough of the template creation and maintenance in the new Manage Closing Task Lists app, I also highly recommend the how-to-videos available via the SAP Help Portal and the in-app help of advanced financial closing.

These features included in the new Manage Closing Task Lists app have been shipped with the recent release of advanced financial closing. There is no need to worry about a migration of your existing templates and task lists, as they were taken over and will also benefit from the new features. You were already able to check the compatibility of your templates in the Define Closing Tasks app. If you didn’t get around to doing that for all your templates, you can still run this check in the Manage Closing Task Lists app.

The enhancements you got to know in this blog post will enable you to set up and manage your closing templates and task lists more efficiently, allowing you to free up time to focus on higher-value tasks such as process optimization – but there’s even more to come! Stay tuned for lots of further updates and enhancements to the Manage Closing Task Lists app in the upcoming incremental releases of advanced financial closing.

Finally, if you are curious to see how these new features can be used to easily set up a new task list template from scratch, have a look at this release video, which summarizes and demonstrates the highlights mentioned in this blog post plus some additional enhancements.

For more information on SAP S/4HANA Cloud for advanced financial closing, check out the following links:

Follow us via @SAP and #AdvancedFinancialClosing, or myself via Jana Kasselmann.