Hi! In the previous post “Voice Bot powered by SAP Conversational AI” my fellow colleague Dmitry Buslov showed what it takes to introduce a modern voice recognition technology into a chat-bot. Now, in this post I’ll show you how to deploy this project to Kyma runtime environment hosted in the Free Tier of SAP Business Technology Platform (meaning, you can go ahead and start your Kyma environment too, at no cost and right now).

In short, Kyma deployment process is as simple as preparing a text file (or two) and uploading it to the Kyma console. But let’s start from the very beginning and carefully prepare our deployment step-by-step.

1. Short overview of the project architecture

As was shown in the previous post, it’s fairly easy to implement voice recognition in a chat-bot by ingesting a proxy app in a middle of data flow between messaging platform (Telegram in this case) and a chat-bot (SAP Conversational AI in this case). The data flow would the following:

Sounds simple? It is, indeed. The proxy app works in “polling” mode as a distinct to “WebHook” mode. That means we don’t need to open ingress traffic towards our app, create API rules or Kubernetes Services. Also at SAP Conversational AI side, we don’t need to setup any specific Telegram integration, because such integration is effectively implemented by our proxy app.

Before deploying the project, please make sure you’ve got the following data on hand as a result of working on materials from the previous post:

Useful instructions on how to grab these 3 tokens may be found here: SAP Conversational AI OAuth

My kind ask for you would be to pay careful attention on what exact bot token you hold in your hands. SAP Conversational AI provides your with tokens of two kinds: DEVELOPER and REQUEST. The Developer token is very easy to find (fair enough under “Tokens” menu), but it’s used only for developer tasks and it is NOT suitable for our project. The Request token can be found under “Versions” menu (because logically enough it depends on exact version of your bot) and this is exactly the token that allows you to send requests to your bot at SAP Conversational AI platform.

Please, keep these 4 secrets next to you as you’ll need them soon at Kubernetes Secret deployment step.

Project “Kyma” is an open-source project based on Kubernetes. Basically, it’s a Kubernetes environment plus all sorts of useful open-source components, already pre-integrated for you, that are necessary to make you environment enterprise grade: service mesh, logging and visualization, authentication and so on. For sure, you can re-create Kyma yourself, but that would cost you some significant time to integrate all the components that are need for a modern production-ready infrastructure.

There’re three ways how you can get your Kyma infrastructure up and running:

All these deployment options are perfectly described in a series of project “Kyma” videos.

For the purpose our exercise, you can choose any of these options. I personally prefer the third one, and there for all the screenshots below refer to Kyma on SAP BTP as of this post publication date (Dec 2021).

4. Build your code into a Docker container

Being effectively a Kubernetes cluster in it’s foundation, Kyma runtime deploys Pods and Services from Docker containers, which are downloaded from some Docker registry (by default it’s hub.docker.com).

Now you need to grab files with a python code from this post (it should be “voicebot.py” and “cai.py”). Add a new file named “Dockerfile” into the same folder as your *.py files. The content of Dockerfile should be the following:

As your Dockerfile is ready you can build and publish new container to the registry. You may need to setup an account with hub.docker.com if you use this default registry.

Have you noticed a tiny dot at the end of the first command? Yes, this is not a typo! There is actually a dot which means that you run “docker build” command from a folder where your code and Dockerfile reside. Please, don’t miss the dot (or update your path accordingly).

Upon your docker image is built and published, you should see it listed on hub.docker.com (or a registry of your choice).

5. Upload your Secrets to Kyma runtime

This is always a good practice to separate all credentials necessary for running your app and the app’s code itself. I’m sure you don’t leave any credentials hardcoded into an app code, do you?

In order to help developers to deal with credentials Kubernetes has a concept of Secrets. Of course this is not a truly secured, encrypted and carefully controlled storage for sensitive data: you still responsible for organizing all of these measures to keep you secrets safe, but Kubernetes Secrets definitely facilitates this job.

Let’s prepare a secrets.yml configuration file and collect all required tokens and credentials that you’ve prepared previously in Section #2 of this post:

This is a regular Kubernetes configuration file which we’re going to apply to our Kyma cluster. What’s important here:

this tells Kyma to deploy a resource of type “Secret”. Please notice the name of our resource:

We will use this name later when attaching secrets to our application. In the stringData section you need to type in all you “secrets” like Telegram bot token and SAP Conversational AI credentials:

If you’re not familiar with YAML language, please note the indentation at the beginning of some lines (as well as their absence in others). These spaces are important in YAML, so please keep them as they are.

If you familiar with kubectl command line, then you can just go ahead and run “kubectl apply -f secrets.yml“. If not, you can go to your Kyma console GUI, chose your namespace and hit “Deploy new workload” button, chose “Upload YAML”. At the moment of writing the Secrets section of GUI doesn’t have a button to deploy new secrets from files. But that’s not an issue, because deploy buttons from any other sections use kubectl tool underneath, so it doesn’t really matter at what section of GUI you upload and deploy a Kubernetes config file.

Here’s a screenshot from Kyma console: When the deployment is finished (should be an instant) you can go to the Secrets section and check if your secrets are stored successfully: 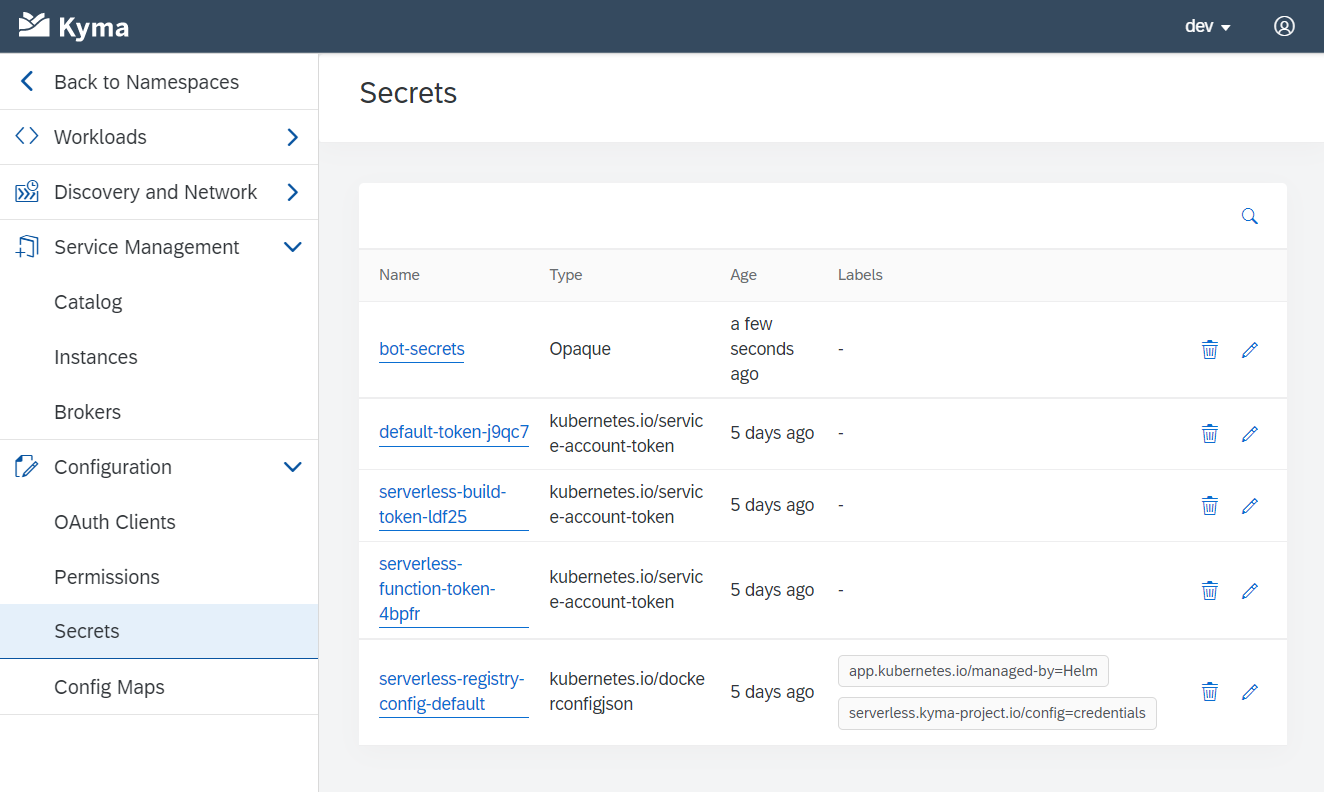 Now we can use required credentials in our app without hardcoding them into code itself or even app config.

6. Deploying the app to Kyma runtime

So the last step before actually running your app in Kyma is to edit a Deployment config file:

Don’t worry too much if you can’t just write such file from scratch. I’m sure nobody can 🙂 (at least correctly)

So just copy it as a template and type your docker image name from Section #4 in here:

After edits the result may look similar to this one:

You can leave the rest of the file unchanged. Or you may want to play with some setting to see how Kubernetes works. For instance this line below is quite powerful:

By altering replicas count (even online, while your deployment is up and running on a cluster) you can scale your application up and down dynamically (try click Edit button next to your deployment in Kyma console, alter the config and update it).

Also notice how previously deployed Secrets are bound to the app through environmental variables at env section:

The binding structure should be quite obvious:

Okey, so there’s not to so much to do here. Let’s deploy this file to the cluster.

This step is similar to deployment of Kubernetes Secrets from the previous section:

At the first sight, you Deployment should be in a fault status. This is OK, and is consistent with the fact that the cluster has 0 instances of our app versus 1 as requested per config file. While deployment process is running, you can go to Pods section and take a look on a pod (or pods) of your application:

Check the “Show Logs” context menu next to a pod. There you can see that Kyma cluster downloads your docker image from repository. Shortly after container is up and running you’ll see a message from the Voice Bot saying “Ready!“:

That’s it! The bot is deployed now to Kyma cluster.

7. Conclusion and the next steps

Now, take a look on what you’ve done in this exercise. Generally speaking, what you need to accomplish in order to deploy a simple voice bot to Kyma cluster is the following:

From here can go further and change the project in the following possible directions:

Please, don’t hesitate to share your suggestions, ideas and thoughts in the comments to this post. Thanks for reading!