You plan the conversion of your on-premise SAP ERP system (running on non – SAP HANA database) to SAP S/4HANA, and consider to combine the conversion with the move to Microsoft Azure. Instead of using the well-known “DMO with system move”, you want to evaluate the usage of plain DMO, as it may result in shorter downtime. Let us know about your project to evaluate if “DMO to Azure” would work. The respective restriction in the SAP Note on DMO, e.g. SAP Note 3070443 for DMO with SUM 2.0 SP 12 (~”do not use DMO for a data center move”) is not relevant for your project then.

More and more projects plan to combine the conversion of their SAP ECC system to SAP S/4HANA with the move to a hyperscaler like Microsoft Azure. For source systems on non – SAP HANA database, “DMO with system move” is an established approach for this scenario. Nevertheless, it comes with more complexity and only limited options to reduce the downtime. The plain DMO approach was so far not recommended due to potential issues like latency.

Meanwhile the migration procedure of the Software Update Manager (SUM) was adapted in a way that the shadow repository is always directly created on the target SAP HANA database. SUM will no longer create it on the source database first and then migrate it to the target database. This simplification reduces the communication roundtrips and raised the idea of using plain DMO for the described move scenario. In a joined effort, colleagues from Microsoft and SAP evaluated the idea, tested it with a variety of systems and parameters, and now came up with a whitepaper describing the approach “DMO to Azure”. [Converting from SAP ERP on Premise to SAP S/4HANA on Microsoft Azure] In addition, you should consider viewing SAP TechEd 2021 session DT201 on this topic [TechEd 2021 (sap.com), registration required]. 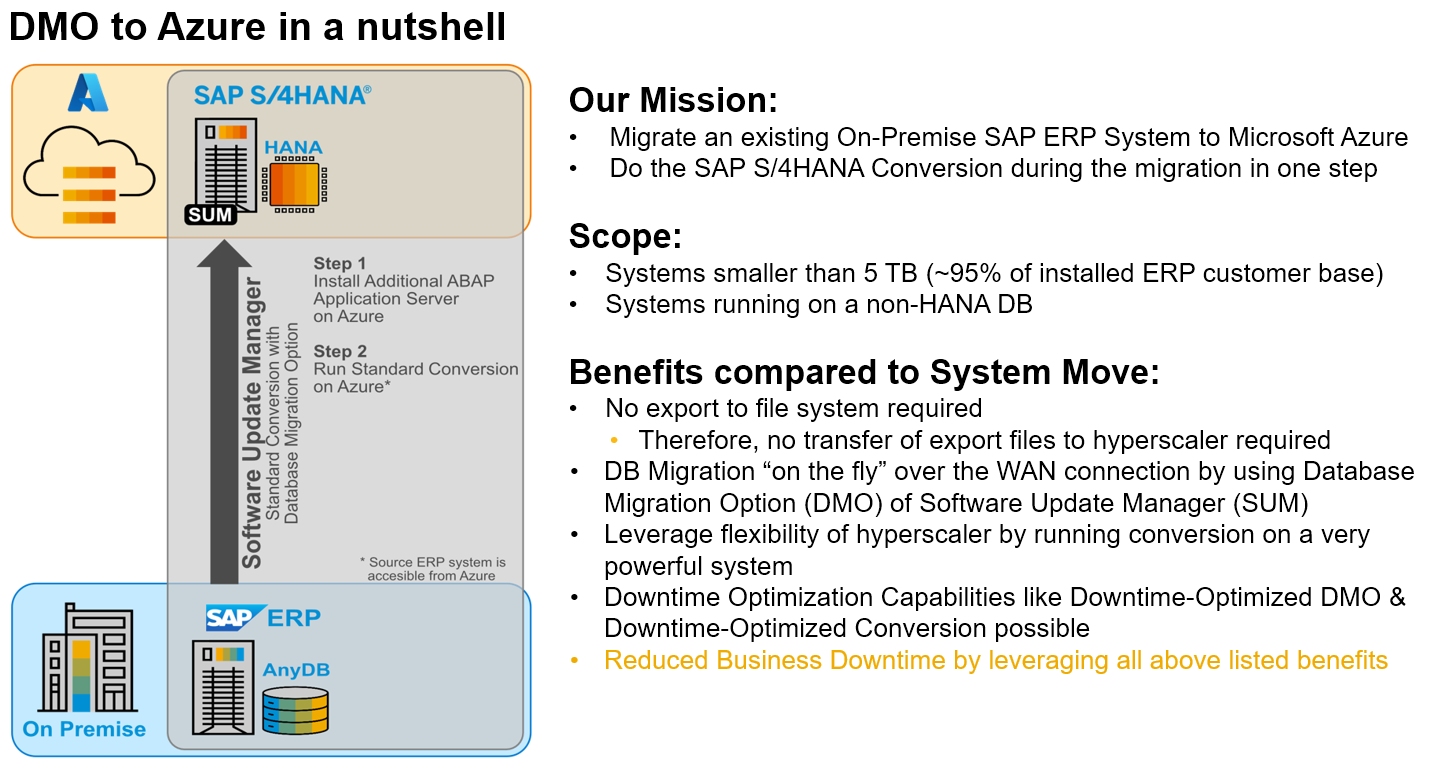 Test “DMO to Azure” with our support

If your project plans the scenario of a combined conversion with move to Azure, let us jointly evaluate if “DMO to Azure” can be a valid approach for you. We are looking for systems up to 5 TB size, running on non – SAP HANA database, targeting SAP S/4HANA 2020 (or higher). We can’t guarantee to meet specific downtime expectations, but you get direct support from SAP and Microsoft for the specific conversion run. Contact us by creating an incident as described in SAP Note 3070443.