Regular expressions, or regex as they’re commonly called, are usually complicated and intimidating for new users. Before digging into the new features, I would like to give a short introduction on RegEx in general &  presenting examples which is explicitly written in ABAP. Those of you who are an expert of this topic and might be get bored, please feel free to skip this section ahead.

RegEx concept is around for quite some time. It is used when complex patterns are expected. Like searching for numbers, alphabets, special characters or validating an Email etc. Many text search and replacement problems are difficult to handle without using regular expression pattern matching. Also, in ABAP, a search using a regular expression is more powerful than traditional SAP patterns. Let’s take this simple example:

Now if you want to find all alphabets in the string without using RegEx and by means of normal search pattern, you need a loop over all the 26 characters. Using RegEx, it would be easy to search and find all the seven character:

Regular Expressions are generally composed of symbols and characters (literals). I try to cover some of the commonly used symbols in the table below.

From what mentioned above, we can write regular expressions like this:

Another concept which might be interesting to know is the meaning of greedy or lazy quantifiers in RegEx. In the greedy mode defined with (*,+,…) a quantified character is repeated as many times as it possible. The RegEx engine adds to the match as many characters as it can and then shortens that one by one in case the rest of the pattern doesn’t match. Its opposite will be called the lazy mode which match as few characters as possible. Means for example in ABAP, by placing a question mark after for example the * , (.*?), you ask to make a subexpression match as few characters as possible. The default behaviour of regular expressions is to be greedy (in fact POSIX imply greedy quantifier which cannot be switched off).

The greedy symbol “(.*)”, give the whole input sentence as an output while the lazy one, “(.*?)” , give us the three words “Jack”, “Jill” ,”hill” .  If you omit the expression ‘ALL OCCURRENCES OF’ in lazy case, only the substring between the first “and the following “is found, namely “Jack”.

Up to 7.55 release, ABAP only used POSIX library for RegEx. Since then, Perl library is also supported. Both libraries differ significantly in how matches are computed. As POSIX is outdated, we will use Perl-style regexes hereinafter. You can try different expressions by playing around with the Regex by simply running the report DEMO_REGEX in AS ABAP. 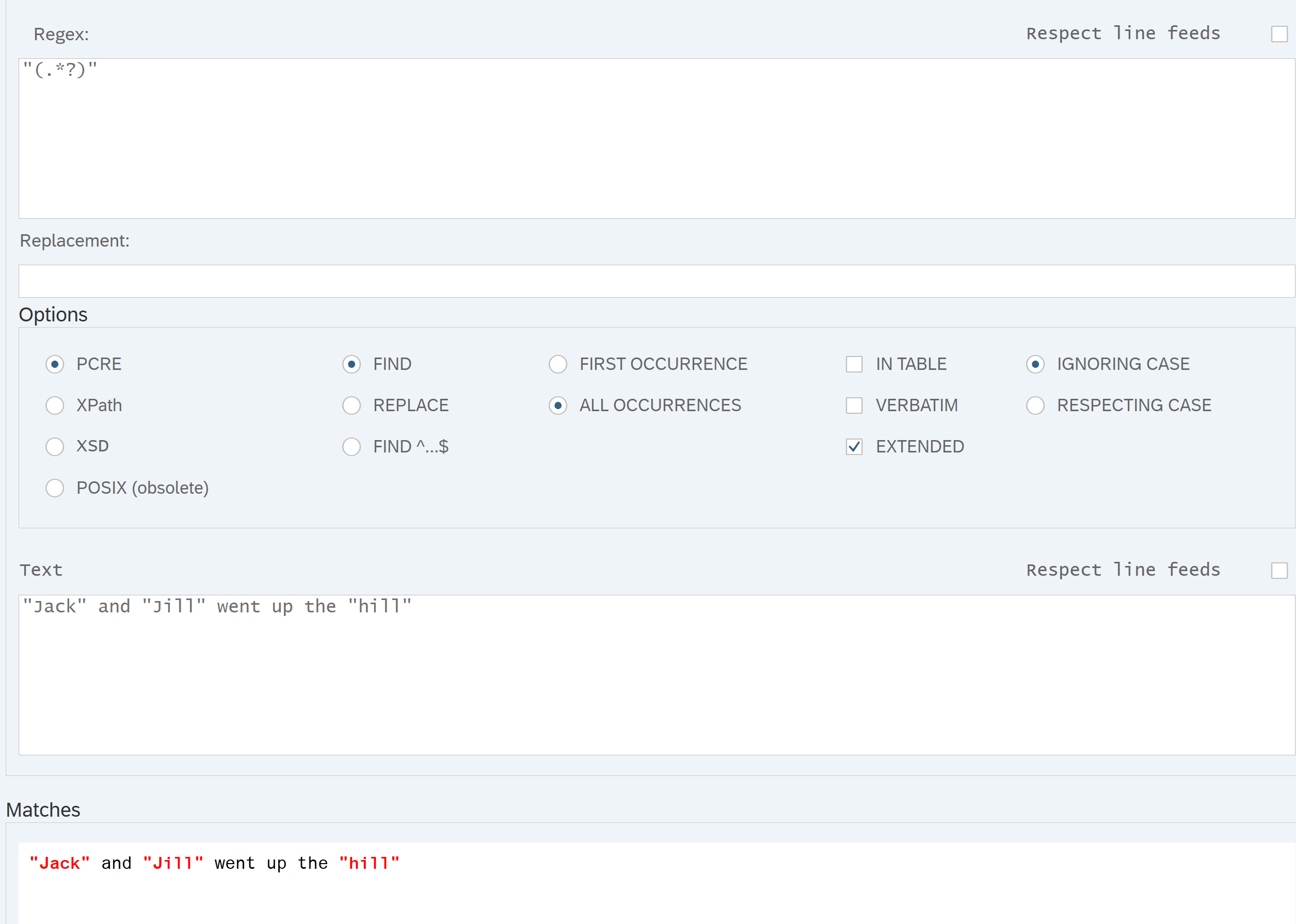 The PCRE library is a set of functions written in C that implement regular expression pattern matching using the same syntax and semantics as Perl 5 and has its own native API. The PCRE syntax which stands for “Perl Compatible Regular Expressions”, is more powerful and flexible than the POSIX syntax or many other regular-expression libraries and perform better than the POSIX regular expressions supported by ABAP.

To have a rough understanding of what PCRE is capable of, you can check the first part of three blog posts series in which the main enhancement made to regular expressions in the ABAP language is introduced. The detailed explanation on migration process from POSIX to PCRE is also nicely explained in the second part of these blog post series.

RegEx with PCRE syntax, can be specified after the addition PCRE of the statements FIND and REPLACE and the argument PCRE of built-in functions for strings. Objects for PCRE regular expressions can be created with the factory method CREATE_PCRE of the system class CL_ABAP_REGEX to be used in statements FIND and REPLACE or with the system class CL_ABAP_MATCHER.

By means of RegEx callouts, one is able to temporary pass the control to the function in the middle of regular expression pattern matching. PCRE callouts specifiess with the syntax (?C…) where the dots stand for an optional argument. If you specify a callout function before calling PCRE’s matching function, whenever the engine runs into (?C…), it temporarily suspends the match and passes control to that callout function, to which it provides information about the match so far. The callout function then performs any task it supposed to do and then it returns a code to the engine, letting it know whether to proceed normally with the rest of the match.

A local class ‘handle_regex’ implements the interface IF_ABAP_MATCHER_CALLOUT and an instance of that class is set as the callout handler. When the regular expression is matched, the interface method CALLOUT is called for each callout position and can access the passed parameter.

The following table shows the requirements made on the arguments.

The following CDS view entity applies built-in SQL functions for strings in the SELECT list to columns of the DDIC database table SPFLI to replace the distance id wherever it is MI to KM with the conversion value.

ABAP SQL now supports some new Regular processing function. The following table shows these string functions and the requirements on the arguments.

This example selects those flights from spfli table which are from either Berlin or Tokyo and give them in lt_table.

The following example uses a regular expression to replace destination ‘Rome’ of flights from Tokyo to Neapel.

The other two possible regex syntaxes which found their ways onto ABAP language are XPath and XSD syntaxes. In order to avoid repetition, I would like to advise you to check the third and last part of the above mentioned blog series as well.

Feature-packed PCRE regex can be used in almost every situation. However, Regex queries as used by Perl are not well equipped to break down XML/HTML into its meaningful parts and parsing them easily. To tackle this difficulty, ABAP also support Xpath & XSD regular expression and transforming it to PCRE syntax internally.

XPath which stands for “XML Path Language”, is an expression language used to specify parts of an XML document. XPath can also be used in documents with a structure that is similar to XML, like HTML. A regular expression in XPath syntax can be compiled in a normal and extended mode. In the extended mode, most unescaped whitespace (blanks and line breaks) of the pattern are ignored outside character classes and comments can be placed behind #. In ABAP built-in functions, the extended mode is switched on by default and can be switched off with (?-x) in the regular expression.

Unlike regular expressions, we do not need to know the pattern of the data in advance as we use XPath. Since XML documents are structured using nodes, XPath makes use of that structure to navigate through the nodes to return objects containing the nodes that we are looking for.

A special feature of XPath regular expressions is the subtraction of character sets. In the following example, the letters a to c are subtracted from character set BasicLatin and the first match is d at offset 3.

Compared to PCRE, XPath regular expressions allow the escape character \ not only in front of special characters. In the following example, the match function with parameter xpath finds x while the match function with parameter pcre does not. Accordingly, the first FIND statement returns in sy-subrc the value 0 while the second FIND statement returns 4.

XSD stands for  “Xml Schema Definition” and is a subset of XPath syntax. Compared to other regular expressions, the XML schema flavor has its own regular expression syntax and specialized notation and is quite limited in features. This feature shortage would not be an obstacle as XSD is only used to validate whether an entire element matches a pattern or not, rather than for extracting matches from large blocks of data.

XML schema anchors the entire regular expression. So, you must not add regex delimiters and you don’t need to use anchors (i.e., the ^ at the beginning and $ at the end). The regex must match the whole element for the element to be considered as valid. The dot never matches line breaks, and patterns are case sensitive. XML regular expressions don’t have any tokens like \xFF or \uFFFF to match special characters nor provide a way to specify matching modes.

There is no XSD syntax for non-greedy behavior. Lazy quantifiers are also not available by XSD. As the pattern is anchored at the start and the end of the subject string, and only a success/failure result is returned, it’s just a matter of performance which cause a difference between a greedy and lazy quantifier. It is not possible to make a fully anchored pattern match or fail by changing a greedy quantifier into a lazy one or vice versa. Besides, there is no XSD syntax for subgroups without registration or back references.

Regardless of its limitations, XML schema regular expressions provide two handy features. The special short-hand character classes \i and \c makes it easy to match XML names. No other regex flavor supports such possibility.

You can not use XSD syntax directly in FIND & REPLACE statements, but you can use the objects of RegEx class created with method CREATE_XSD with the addition REGEX instead.

The following example uses XSD syntax that is invalid for PCRE and does not find any matches for POSIX. It would work also for XPath.

The result of the replacement is <option:A><option:B>…<option:Y><option:Z>

Character class subtraction makes it easy to match a character that is in a certain list, but not in another list. This feature is particularly useful when working with Unicode properties. E.g. [\p{L}-[\p{IsBasicLatin}]] matches any letter that is not an English letter.

As said, the regular expression let you parse strings, or complex replace operations. It is a powerful tool for text processing and is of practical use to extend your ABAP capabilities. I hope I could give you a rough understanding of RegEx and the supported syntaxes in ABAP, namely PCRE, XPath & XSD.

While PCRE is more powerful and can be used in most cases, it’s better to use XPath or XSD for selecting nodes or compute values (like strings, Boolean or numbers) from an XML document to be fast and more efficient. The POSIX syntax is obsolete now and one need to do the migration to any other regular expression syntaxes supported by ABAP. ABAP SQL and ABAP CDS view also support the PCRE syntax with the built-in functions mentioned above. More detailed information can also be found in the blog post series here.