We, as a functional consultant, often follow SAP footprints to replicate any business process whose some steps are pre-configured in default plants or warehouse (0001). In the same direction, if 0001 SAP warehouse is looked upon, for Inbound storage control, INB1 Quality Inspection Step( QIS) is prior to Deconsolidation( IB02).

Well, this may not sound very good and some of you may not agree that there is no meaning of QI before decon, this blog is written to explore why SAP gave this sequence and what are the business requirements to configure QI before decon during Inbound process in POSC.

Below diagram has 2 process.

2.  This is more complex. 1 HU has partial good quantity and partial faulty quantity. My idea is to repack partially good and partially rejected quantities into 2 separate HU at QI station only. The partially accepted lot should divert to decon because of specific HU type check for final bin.

The rejected HU should directly diverted to Scrap area without going for any decon step. 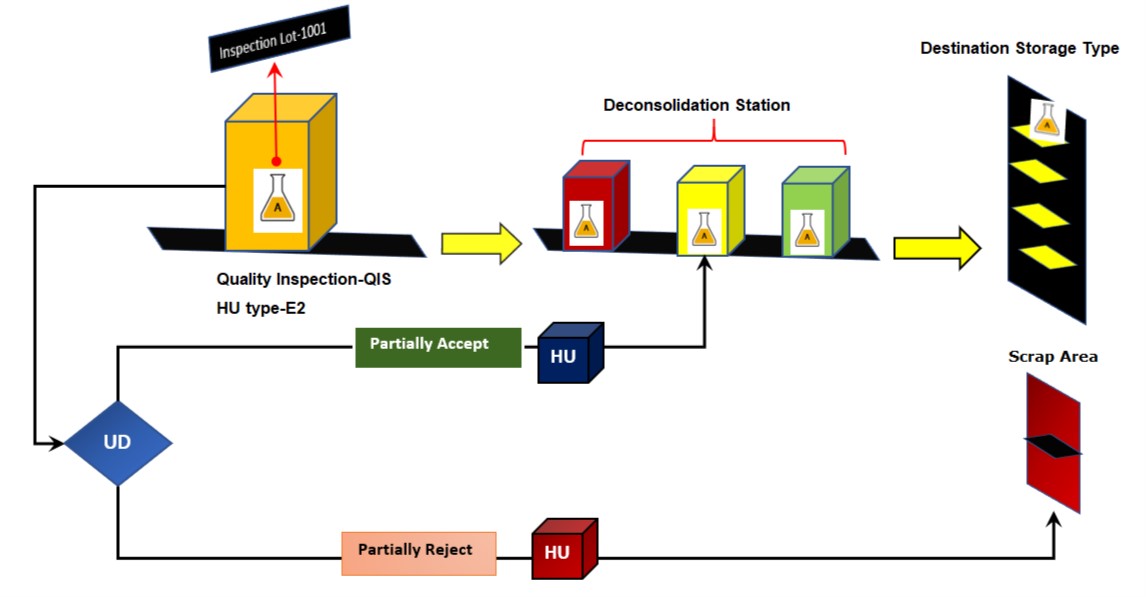 Deconsolidation always doesn’t mean a mixed HU, even with 1 Product( or batch), HU can be relevant to deconsolidation based on characteristics of packaging material, technically, I am taking of HU type Group( HU types). In this regard, it makes sense to perform QI prior to decon, and latter product can be deconsolidated with compatible HU types to send it to final bin. 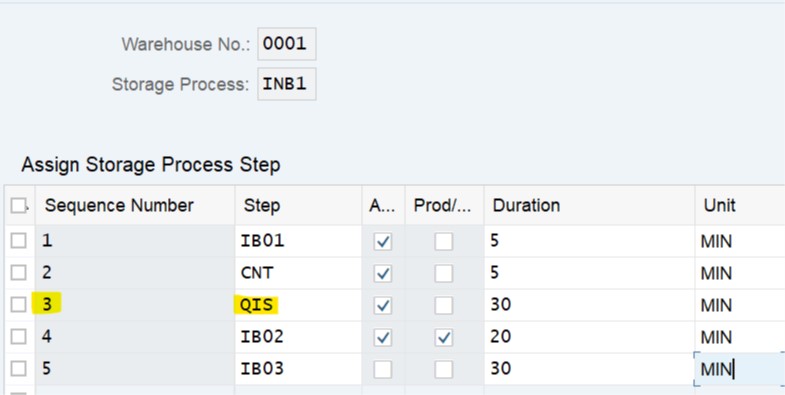 Process 1). My POSC steps are

Inbound delivery packed into HU. Perform Implicit GR, if you directly perform GR at staging area, External Step QIS will not be wired to HU and it triggers an error when HU is closed in QI station, Try that:) 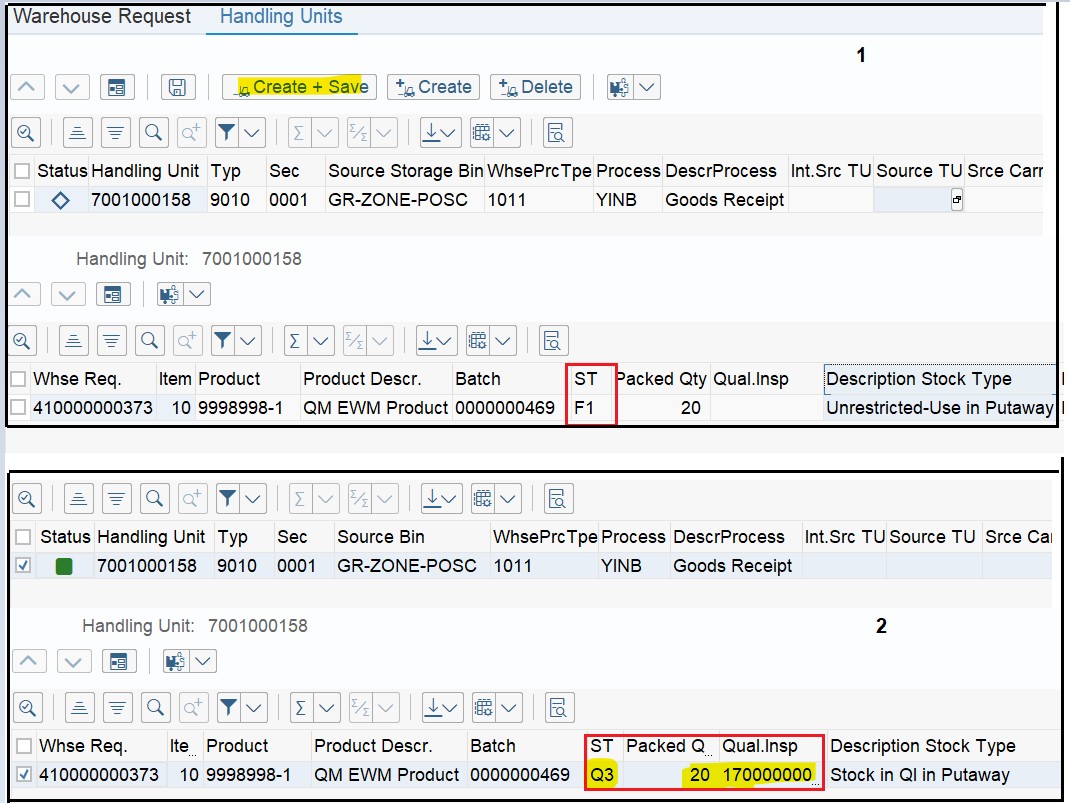 After performing implicit GR and WT confirmation, HU is moved from staging area to QI 8020 QI work center and External step ZQIS is wired into HU.

Note- SAP has given to 2 different variants to perform QI with explicit GR either at Door or at staging area OR implicit GR moving HU to work center and do inspection at WC bin. This process fails if you follow variant-I. External steps QIS only gets wired into HU if implicit GR is performed.

So brain has to put focus 2 things, take UD and close HU and save. If I am an end user, how painful it could be to perform these steps, I wish SAP will make this more business and user friendly. 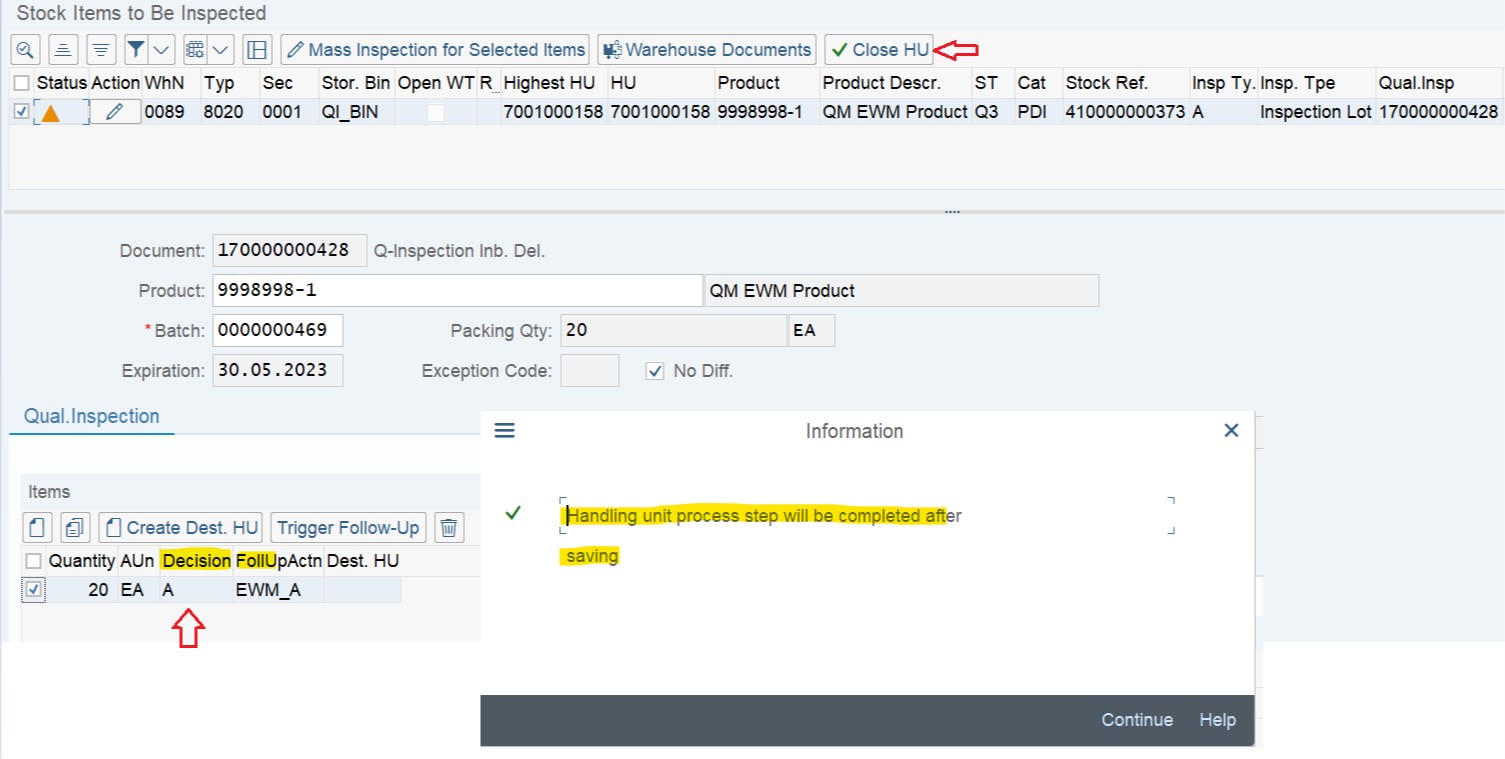 Once HU is closed, Decon and Final tasks are open:)

Finally we achieved the first process and this proves Quality inspection before Deconsolidation is very much possible and in consonance  with SAP 0001 Warehouse design.

When I conceptualized to move in direction of process 2, I had no idea whether this will work or what results I will get, but still I dared to test this.

Since from 1709, partial inspection of HU is very much possible, this reinforced to perform partial UDs on 2 different HUS. My idea is to create 2 different HUS at QI station only.

With one HU of 40 Units, created 2 HUs at QI station and performed Partial UD on these new HUS. 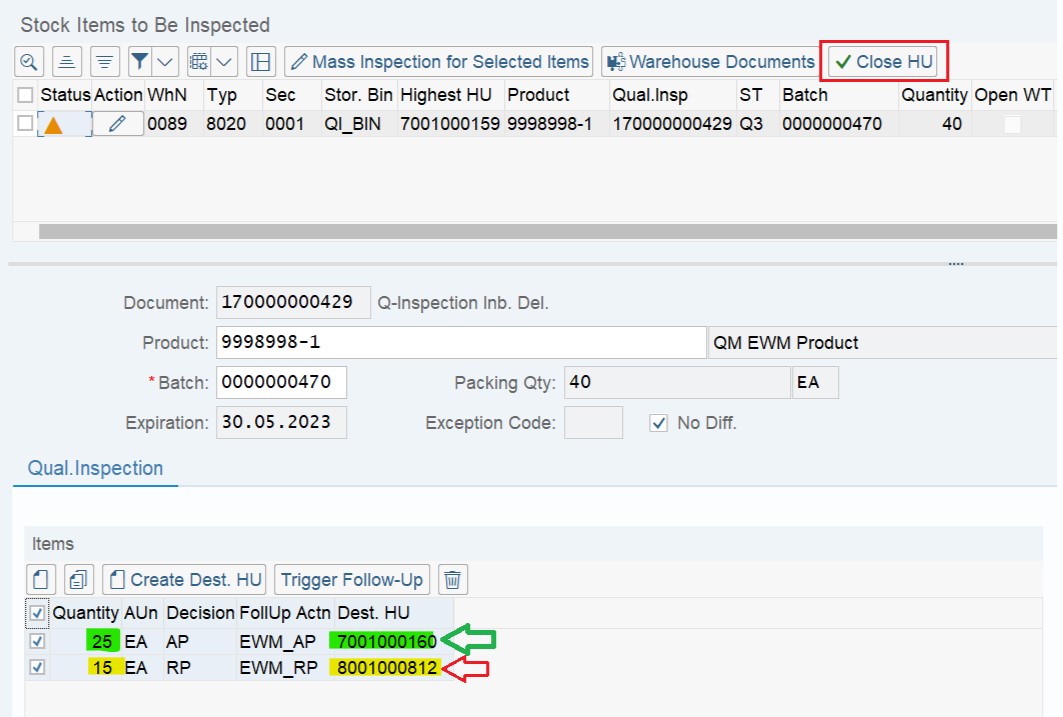 Remedy: Looks this is a gap in system and it is required to implement SAP note.

This note talks about if there are QI, decon and Putaway steps and Usage decision is made at QI work with creation of ne HU at QI station only, system does not create the WT for destination HU. So this note is mandatory for next step.

Hence, with all the testing, it is quite clear that QI before deconsolidation is very much a possible scenario and can be mapped.

EWM architecture and Programming book by SAP press too endorses the ”QI be be inserted before Decon.

Book quotes: Deconsolidation may happen at any time in the process. It makes sense prior to ‘QI” if sampling is used to  separate the samples from rest of the stock and only brings the samples to the inspection work center.( Page no 84).

Hope you liked the blog, I would highly value any comments or correction to make this blog more productive.