Have you come across complaints from business users that the outputs take a long time for printing?

We had this issue of printing slowness.

When a customer came into the shop, bought some product, and made the payment, the employee would run our custom transaction which would trigger a smartform and a Payment receipt would be generated.

This is how the business described the issue to our development team. We did not have much info other than the custom transaction.

On further probing, it was revealed that they were issuing a print in Black & White.

Trying to find the cause

With this limited information, we initially thought that it was some issue related to Basis which somehow caused a slowness.

Also, being ready with trace in the Production system waiting for the shop-employee to run the custom transaction and analyzing the issue did not seem plausible.

We tried setting trace in Quality system, but all seemed good from ABAP side.

The business wanted to get this resolved on high priority.

The issue was known but the cause was not known and so there was no replication of issue possible.

For people who are interested in the journey, I request you to stick around.

The cause of the issue was a marketing image on the bill. The image (which was uploaded as a color image in transaction SE78) was regarding a new app the company had created for online orders that took up almost 30 % of the page.

I did some reading later and found that every time a smartform is printed the graphic gets loaded in table TST03 and the table gets large and this slows down the printing. In our case, the image was non-compressed and quite large. This image was 18cm x 6cm non-compressed color image.

The journey – Data Gathering and Analysis

We decided to gather details like the Bill Number, Spool number the detailed times of the printouts and stored them in a custom table and created a report that would update this table. The report ran as a background job every 30 minutes in the system.

We created the custom table as shown below: 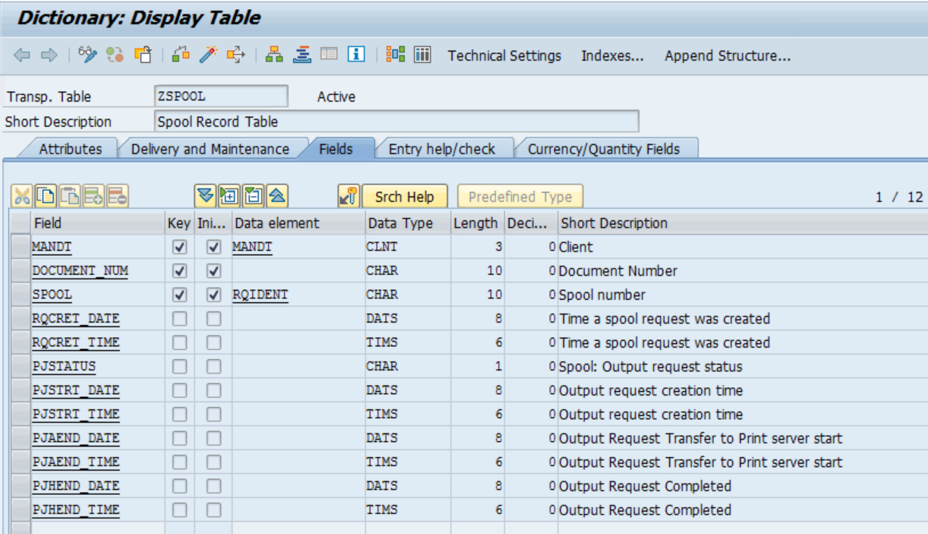 We added a few lines of code after calling the smartform.

Some excerpts from the custom report

And just like that, the report was ready. We transported the report to Production and let the batch job run for a week. At the end of the week, we had gathered enough data.

SO THAT WAS IT…

We knew the issue now and quickly replicated this in Development system. We ran our report and the data in the table looked like this.

Clearly it was the large image that was causing the issue. But since we knew that the final receipts issued to the customer were in Black & White, we uploaded the marketing image as a Black & White compressed image in SE78 again.

We adjusted the smartform to print Black & White Image. We tested this in Development system. We ran the report and looked at the numbers. The the time gap was just under 15 seconds (a considerable improvement).

We moved the changes to Production and received a good feedback from the Business. Issue Resolved 🙂

One may argue that we made a mountain out of a mole hill and did a lot to find out nothing. But I would argue that a lack of information led us on this path.

The issue resolution was urgent for the business and we were not sure which path to follow.

We tried a different approach altogether- to start from scratch. Personally, it was a fun journey of how we started with limited info. We gathered a lot of data. We had enough data to analyze and we were successful in finding the cause of the issue.

Once we knew the cause, resolving became so much easier!