This posts was inspired on Paul Hardy‘s great annual blog series about the International Editable SALV Day (which will happen next week, I cannot wait for it again). The fact to be remembered here is the offical SAP Build product “sunset” done by Keith Fischer on February 4th, 2020 completes 1 year today.

After that announcement, SAP made clear BUILD would stay online for a while – without mentioning exactly a deadline. 365 have passed since them and anyone is still able to user BUILD as before – using a trial account.

After this announcement SAP BUILD turned to ashes in my mouth as I personally believe it was a very bad move from SAP. Even worse, even after 85 comments on this single blog post and some duplicated ones on the FAQ provided, there are many open questions.

So, I will repeat some of my questions here to maybe make easier to have them answered from somebody.

After the end of all customer contracts, will SAP BUILD be shutdown completely of will it just stop receiving updates?

Still no answer, but according to SAP Build offical Help – Customer Data termination, “SAP is legally obligated to terminate the customer’s data”.

Compared with previous years, 2020 was a very quiet year in terms of updates. However just last December 2020 we had an update on the Build blog saying:

“We hope that you enjoy this new release and continue to build beautiful prototypes with SAP Build.”

Right after this wish, there is a link for the sunset blog.

I really don’t get it. I know that probably there are some still valid licenses and updates are needed until all contracts are expired, but this sentence gives me the impression that I’ll still be able “to build beautiful prototypes”. Assuming this is true, why do we have a “sunset”?

Assuming no one will shut down the servers, will it be possible to create new trial accounts?

Still no answer. Not clear if the server will be shut down. Maybe someone forgot to do that and right after reading this blog build.me will give a 404 error. Who knows?

Still no answer. Nobody asked the a list of companies with a commercial license. We just wanted to know the exact date of the end of the product. Maybe that’s why SAP uses the term “sunset” when abandoning a product (or a name). Everyday there is a sunset, so it can be any day. Today or tomorrow, it will be a sunset. If the sky is cloudy as the official annoucement was, no one can really tell if the sun has set.

Still no answer but clearly not. SAP Fiori Tools is really NOT something to be compared with what SAP Build provided. More information on Fiori Tools below.

Will SAP Fiori Tools allow validating prototypes with something similar to studies in BUILD?

Hell no – even without an answer as well

Will SAP Fiori Tools be publicly available with trial versions?

Fiori tools is not a prototyping tool. It’s a developer tool in the form of VSCode extensions. The main extension (SAP Fiori tools – Extension Pack) have been downloaded from VSCode marketplace 8509 times until today.

That’s 1000 downloads per month after approximately 8 months since it was released. Best case scenario, 8500 people are using it. That is not only way less people than the quantity of registered users on BUILD but also a huge fail as a offical and and free SAP extension.

Poorly advertised, poorly documented and poorly maintained (for sure the the slowest VSCode extension I have ever used – gives the impression I’m using Eclipse when using it).

None of this 8500 people have used Fiori tools to prototype something. Because it doesn’t.

Rumour has it the extension pack would include an extra extension to allow prototyping. As this was not officially said neither  was it released, it does not exists .

Other two questions does not make sense anymore as we today know Fiori Tools is just a VSCode extension:

What will be the pricing model SAP Fiori Tools? If this is not ready, when will it be ready?

I’d like to take advantage of this blog and do some mental exercises:

What if this sunset announcement wouldn’t have been done? Or, at least, postponed to a closer date of the official and still unknown deadline.

Fiori tools was launched months after the sunset blog. How come does SAP “sunset” a product, telling your customers to use another one that:

How many apps you, Fiori developer reading this blog, have created on the last 12 months? How many of them were apps based on Fiori elements? Please comment below.

Myself: created/supported the development of  ~10 apps, 3 of them were based on Fiori Elements and if I could go back in time, 2 of them would be freestyle apps. The most successful apps were not based on Fiori elements. 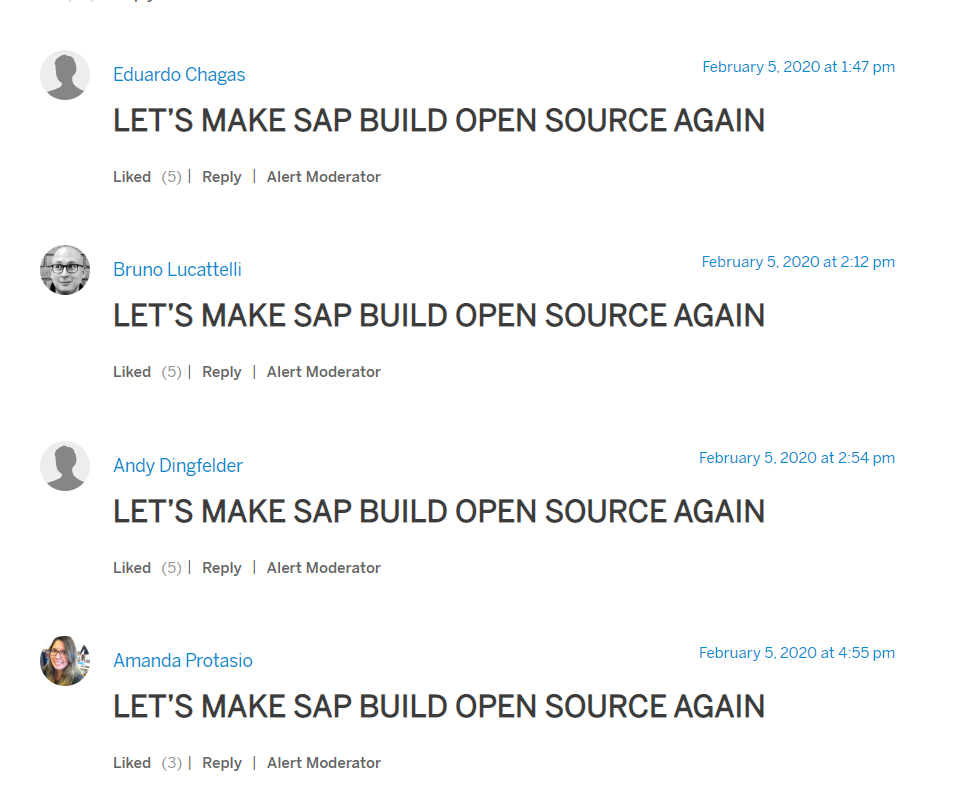 I personally challenge the SAP Community team to list all blog posts on 2020 which have more comments and engagement than this one. Or posts which a single comment had 5x more likes than the actual blog post. I personally saw 2 or 3 blogs with more than 85 comments. At the same time, many others were in the “featured content” with less than 2 comments. Of course a human does a review on the blogs to make sure nothing on the featured section gives a bad impression.

But this is actually not important. It’s a fact that all those people were just ignored. Once this happen in this proportion, there is no SAP “Community”.

No plans to open source Build. You know what? I’m OK with that. As I’m OK of not recommending so many tools from SAP that can be and are being sunset right now, specially under the SAP Cloud Platform umbrella.